Last week I reviewed cost of production information that can help producers with benchmarking within their own operations.    A representation of calf prices in relationship to feed costs and total direct expenses are shown below in Graph 1.  Don’t forget to go to the following website if you would like to evaluate these benchmarks in more detail when comparing to your operation http://www.finbin.umn.edu/.  This week I wanted to look at adding producer returns during the same time frame.  In Graph 1, I added this information as returns over direct expense.  It is interesting to note that these returns over direct expenses for the years 1993 and 2011 are within $12 of each other and would be well over $200 per head.  Even though the price of feed and for that matter all direct costs, have increased dramatically, calf prices have more recently kept pace to provide similar returns over direct expenses.

Some would argue that producers could earn the same money on a per head basis for a calves valued at $500 back in the early 1990’s compared to calves now requiring to be valued at $800 per head.  This significant change in the last decade has been felt throughout the beef industry as it requires much more capital to buy cattle and place them on feed or grass in addition to breeding stock purchases. 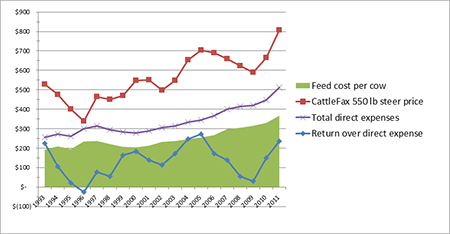 Graph 1: Feed costs, total direct expenses and return over direct expenses are as reported by FinBin, a Farm Financial Database supported by the University of Minnesota, http://www.finbin.umn.edu/. CattleFax 550 lb choice steer prices are from the March 13’ CF Factors to Watch Report. 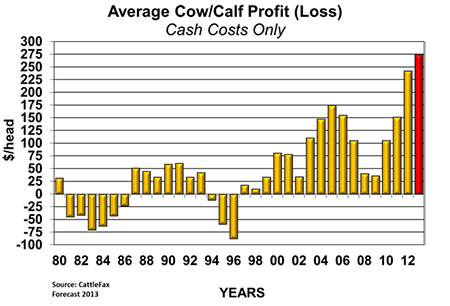 Graph 2: Projections for cow-calf Profit and Loss from CattleFax Forecast 2013 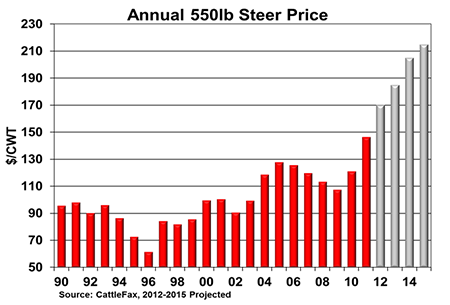 There is no doubt that input costs for feed and other direct expenses have moved up with calf prices.  There was a period from 2006 to 2009 where calf prices came down while costs continued to rise, resulting in a decrease in returns for cow-calf producers.  We do, though, appear to be on a path of correcting this reduction in profit as you look at 2010 and 2011 results from both FinBin data – Graph 1, and information gathered by CattleFax – Graph 2.  If you look at projections by CattleFax – Graph 3 we might feel optimistic possibly as far out as 2015.

So why have I included 3 graphs in this blog?  First, be assured the reason is not to add confusion.  On the contrary, I hope that these graphs will help illustrate a few points about the upcoming years in the cow-calf business:

While there is no doubt that cow-calf production costs are increasing, calf prices are estimated to be at levels that should more than offset these increases and result in very profitable returns this year and in the near future.  There are always dangers in these types of projections as mother nature can heavily influence localized conditions and cost structures.  Persistent drought can be a major impact that may force increased expenses and potentially severe reductions in animal numbers.  One should always focus on what they can manage and costs of production, like feed costs, is no exception.  I would caution producers not to get caught up and dwell on these increases when you consider what the value of calves are today.  Be careful not to trim expenses too closely where it starts limiting production.  The price of calves is indicating we are in a period where there will be great returns for the Cow-calf producer.  You’ve earned it!