Technology is everywhere. Our homes are wireless, tractors all but drive themselves, and you can even get reminders on your phone to put out fresh barrels. As much as technology is readily accepted in other areas of everyday life, there is hesitation when it comes to technology and food production. Public concern over the use of feed additives in food animals is high with those outside the ag community. However, what would happen if the growth enhancing technology (GET) we take for granted in cattle production (ionophores, implants, etc.) where no longer available?

A review in the October 2012 issue of the Journal of Animal Science tackled just that question. The table below illustrates the changes needed to maintain pounds of beef produced in the U.S. at 1 billion pounds. The GET types that were included in this review include in-feed ionophores (monensin, lasalocid), in-feed hormones (melengestrol acetate), beta-andrenergic agonists (ractopamine, zilpaterol) and steroid implants. 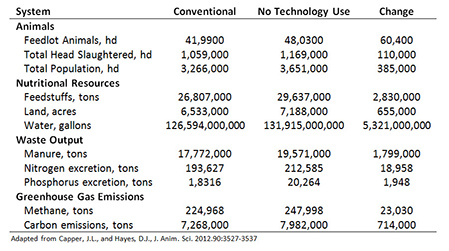 Losing GET will result in more cattle, land, feed and water needed to maintain current beef production levels. It will also increase the cost of production. The review suggests that production costs to get a steer to 1,200 lbs. would increase from $1,704 to $1,860. This $156 per head increase translates to reduced profits and eventually reduce production. There would be increased competition with pork and poultry at the meat counter as well. It would not be the end of beef production in the US, but would mean lost jobs and perhaps the next generation not being able to stay on the ranch.

We can’t overlook the natural and organic cattle producers in this discussion. They have paved the way for production without the use of most or all GET and have many successes. There is a thriving market for cattle produced in this manner. However, the beef industry as a whole cannot afford to not utilize GET. It’s just not feasible when you look at the numbers in the table above.

We have to be our own advocates when it comes to GET. We as beef producers, stewards of land and animals, have to be ready and willing to explain our methods. The standard answer of “that’s the way dad/grandpa did it” doesn’t work anymore. We have to be mindful of the products that we’re using with the cattle. We must use them properly, read and follow the directions on the tag. We should be asking ourselves: why are we using it? does this group of cattle really need it?  what are the withdrawal times?

We can’t rely on an industry that doesn’t take every advantage of approved technology to feed our country. The void in global beef production left by the lack of GET use in the U.S. would be made up by another nation. Countries like Brazil would be mostly likely to increase production, however, that would mean clearing land to add pastures. Additionally, not all countries hold to the same standards for food for human consumption that are in place in the U.S.

When you consider that with GET, beef producers in the U.S. can feed our nation and part of the world, why would we want to take a step backwards? It would be the loss of a way of life, the loss of the ability to feed ourselves and the beginning of relying on outside sources of beef. When you think of it in those terms, it goes against the American spirit.

Read the abstract or download the entire article here.