American agriculture is a world leader because of the innovation and hard work of the American Farmer and Rancher.  Adopting new technologies has been at the center of this success. Often the innovation is the result of a need to improve animal performance, health and well being or improved utilization of a limited resource. If the estimates of 9 billion people in the world by 2050 are correct, the primary limiting resources will be land and water. Maintaining the choice to use the tools and technology available is being debated and we are at risk of not having many of these tools. Changes occurring in our industry can be seen as an obstacle or opportunity to better communicate why and how we manage livestock.  The Food Safety Modernization Act and the move to veterinary oversight using the Veterinary Feed Directive (VFD) for medicated feeds are great opportunities to build trust and accountability with the food consumer.

All the stakeholders in the livestock industry, including the feed supply chain, need to be more engaged to address significant challenges on social, environmental and economic issues. Developing effective communication plans and a concerted message that portrays the industry in a more positive light with the consumer must happen if we are to continue to produce meat, milk and eggs at the level needed to feed the world. The recent measles outbreak is a great example of the challenge we face.

The recent outbreak of measles and the debate over childhood immunization has some striking similarities to the current challenges we face in animal agriculture. Measles was basically eliminated in the late 1990s, but a small fringe group of anti-vaccination activities gained media attention which lead to a significant percent of the population to not vaccinate their children against measles. As of February 10, 2015 there were 121 reported cases in 17 states. The recent outbreak indicates 85% of the cases started from exposure at a California amusement park.

The table below shows some of the striking similarities between the measles debate and animal agriculture debate. 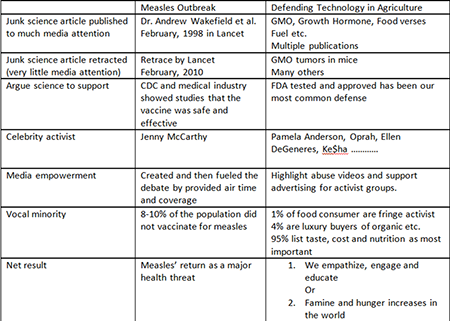 The livestock related topics receiving consumer and media attention will only increase in their complexity.  Collectively we must do more to bridge the information gap between animal agriculture and the consumer. I encourage you to include and invite the public to events such as open houses, farm tours, pasture walks and educational events. We are a minority that needs a collective voice to acknowledge the consumer’s concerns and begin a constructive dialog.

How can CRYSTALYX® products serve as an example of technology used in animal agriculture? CRYSTALYX® IONO-LYX® B300 is a low moisture supplement medicated with Bovatec®, an ionophore that improves feed efficiency by altering rumen microbial populations. This product will not require a Veterinary Feed Directive (VFD) because it is in the class of animal only antibiotics. The debate about antibiotic resistance is on-going and the feed industry is moving to VFD’s for medicated feeds by December 2016. This change is positive and will create a chance to engage the public in productive discussion of how and why we use and need antibiotics in animal agriculture.

Earn to Learn™ by CRYSTALYX® Brand Supplements is our effort to make contact with the next generation of consumers with a program that benefits the local community in several ways.  Earn to Learn™ is a fund raising program for rural youth groups where the group earns funds by selling discount coupons for CRYSTALYX® Brand Supplements to livestock producers. The youth groups earn money by working with livestock producers who in return receive a generous discount for their contribution. Much like the general population, a very small percent of the youth members in these groups have any connection to animal agriculture but they are interested in where their food comes from. They are also very good at finding and sharing information on the internet and social media. Collectively it is our responsibility to have our story available that shows Animal Agriculture in a positive light.