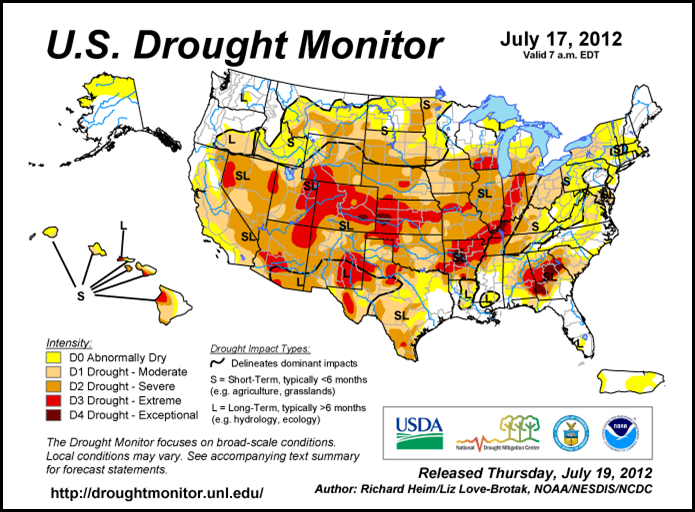 I worked this week in parts of Indiana and Ohio that are in some of the most extreme drought conditions I have seen. The Drought Monitor shows that over half the country is in drought. I observed corn that varied from knee high to shoulder high. All the plants were stressed with curled leaves and many had the bottom leaves fired. Greater than half the plants in the hardest hit areas had no ear or limited kernel development.

Pasture conditions in many areas are very poor and there is a real concern for having enough hay. An option for forage is salvaging the corn as silage or hay. The nutrient value of drought stressed corn silage will be 60-70% of normal corn silage with the biggest difference being that it is much lower in starch. However, the NDF digestibility often will be higher. As we consider our forage needs for the beef herd, there is the potential to harvest several tons per acre of silage or hay. A general rule of thumb is each foot of plant material equals 1 ton of forage per acre. For example, 5 foot tall plants will yield 5 ton/acre. Several items unique to drought stressed corn need to be evaluated. 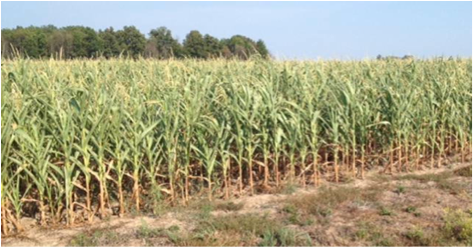 Plants under stress will stop taking up nitrogen and stop producing protein. Unused nitrogen will accumulate in the lower parts of that plant as nitrates. With severe and prolonged drought there is less risk of nitrate accumulation in the plant. If there is a rain event, the harvest should be delayed at least 5-7 days. Nitrates tend to accumulate in the bottom third of the plant, so it is recommended to cut at least 12 inches height. It is not advisable to graze or green chop drought stressed corn. Fermentation of silage will reduce the nitrate level by 50-60%. If corn is harvested as hay, there will be NO reduction in the nitrate levels, therefore, standing corn needs to be tested for nitrate before the decision to harvest as hay. Silage offers the advantage of reducing the nitrate levels through fermentation. However, silage is not easy to transport long distances, which make corn hay an attractive option.

Sampling Prior to making hay; 12-15 whole plants should be cut at the harvest height, chopped into 1 inch pieces and mixed. A 0.5 lbs. sample (large freezer bag) should be sent to a commercial forage testing lab for nitrate analysis.

Silage should be allowed to ferment for at least 3 weeks prior to feeding. At that time, a 0.5 lb. sample should be sent to a commercial forage testing lab for nitrate analysis.

Based on the nitrate level in the hay or silage, it may be necessary to dilute the diet with non-nitrate containing feeds to get to a safe level. Work with a nutritionist to determine the best feeding recommendations. Below is a general guideline on nitrate levels.

The drought of 2012 will be a challenge for many livestock producers.  Salvaging the corn crop as a forage replacement will be a viable option.  Nitrate levels need to be considered, but can be managed.  Corn silage or hay from drought stressed corn can provide some needed tons, and be a good quality feed for the cow herd.