Parasites are a drain on cattle performance and your wallet. While most people may not include flies in the parasite category, they should. Horn flies, in particular, are the most economically important external parasite in cattle production with estimated losses averaging $1 billion annually. Prevention and control are the keys to tipping the scale back in your favor.

Horn flies are small, gray-black, biting flies that congregate on the backs of cattle. They spend the majority of their life on the animal, taking 30-40 blood meals a day, leaving only to lay eggs in manure pats that are less than ten minutes old. As the number of flies per animal increases, the discomfort level of the cattle increases. They will huddle together in tight groups to try and escape the flies. This means less time grazing and the stress level of the cattle increases from heat generated by bunching and the irritation of fly bites. Research has determined that the economic threshold for horn flies is 200 per animal (100 per side). 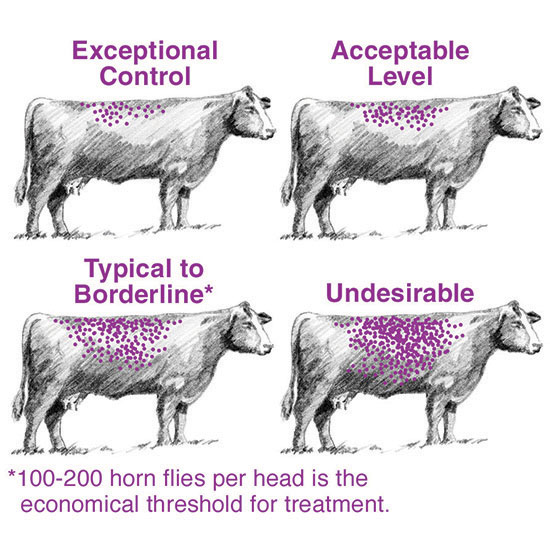 Adult cattle aren’t the only ones negatively affected by a lack of horn fly control. The majority of cattle producers will have calves on the ground during fly season. If cows aren’t grazing, milk production is going to decrease and calves won’t reach their growth potential. Louisiana State cow/calf specialists noted a similar advantage of calves from cows treated for horn flies with a 19 lb advantage total weight gain at weaning.

Yearling cattle can also benefit from horn fly control. A three year study conducted in Louisiana compared weight gain and pregnancy rates in yearling heifers treated or not treated for horn flies. The total weight gain for treated heifers was 14% more over the 3 years than untreated heifers. Also among the pregnant heifers, those treated gained 8% more than untreated. However, pregnancy rate was not affected. An earlier study also conducted in Louisiana showed that Bos indicus percentage cattle benefited from horn fly control treatments with a 17% increase in weight gain over untreated cattle.

Horn flies are a pain, literally and figuratively. With record calf prices, can you afford to not treat your cattle? What does 17 lb in weaning weight mean to your bottom line?