Horse folks are often fond of the saying – No hoof- no horse. Well, horses aren’t the only animals in which we need to worry about hoof soundness. Hoof soundness in sheep is absolutely critical. Grazing sheep that are lame won’t venture out and forage well and thus may gain less weight or even lose weight. Breeding rams that are lame will not travel to seek out ewes in heat and may lose libido all together. Prolonged wet conditions make foot rot complaints common. 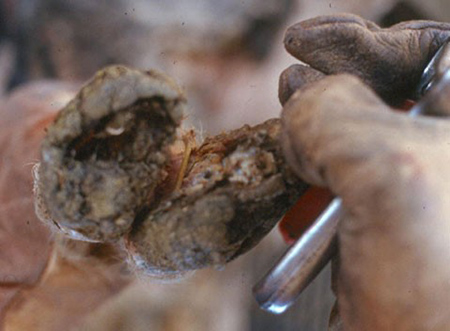 Foot rot is caused by an infection of anaerobic bacteria in the foot. The exact species of bacteria will differ slightly among species; however, there it has been suggested that bacteria from one species can infect another (i.e. cattle foot rot bacteria can infect sheep or goats and vice versa). Some of these bacteria are present naturally in the environment (present in manure and the soil) while others are brought in by infected animals or human-caused contamination. These bacteria can survive in the soil from 1 to 10 months and even longer within hoof tissues.

These organisms cannot penetrate, healthy intact skin and hoof tissue. Cuts, bruises, puncture wounds, or severe abrasions permit entry. Therefore, conditions that result in foot injury will predispose animals to contracting foot rot. Injuries are more likely to occur when the tissues of the feet are swollen and soft due to continued wetness. Also, the bacteria survive better in the environment during wet conditions.

The best prevention is to never bring contagious foot rot onto your farm in the first place. Do not purchase animals from herds that show signs of lameness. Always quarantine new animals (from any source) before introducing them into your herd. You may want to run sheep through a footbath or spot treat foot rot infections with aggressive hoof trimming and topical application of zinc sulfate solutions or other acceptable treatments. In severe cases antibiotics may be in order. Consult your local veterinarian for more information.

Also be mindful of farm-to-farm transmission by humans. This is especially important with sheep operations that host tours and field days. Insist that visitors wash their boots in a footbath of diluted Clorox or zinc sulfate solution. Many larger sheep farms provide such washing stations in the parking area for visitors. Another option is to provide them with disposable boot covers or provide your own footwear. Another consideration is to not allow visitors to drive their vehicles into your pastures or driving lanes, thus transferring manure and bacteria via the tires.

Keep sheep hooves properly trimmed. During routine trimming, trim animals with healthy feet first so as to not spread the bacteria within the herd.  Then, as you work on infected animals, disinfect your hoof shears between animals with a Clorox solution. Sheep that display chronic foot rot should be culled, as they will act as a reservoir for the entire herd. 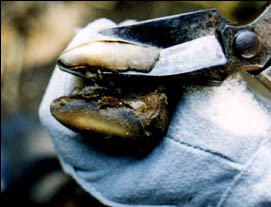 Role of Zinc in Hoof Integrity

Zinc is a critical nutrient involved in the maintenance of epithelial tissues. Zinc is estimated to be a component of over 200 enzymes. Zinc’s role in maintaining hoof tissues includes (but is not limited to) stimulating growth of epidermal cells, production of keratin (sulfur containing protein which is the primary component of the hoof), improved wound healing and improved cellular integrity. Zinc-deficient sheep exhibit increased claw and hoof disorders as well as skin disorders and poor wound healing. Improved zinc nutrition has been shown to improve hoof integrity in deficient animals.

Marginal to deficient levels of zinc are common in many soil types across the United States. Additionally, high levels of naturally occurring antagonists such as iron, molybdenum, and sulfur are common in several areas. Sheep producers who have observed lameness and/or other hoof problems should consider use of CRYSTALYX® Sheep-Lyx™ to receive NRC-recommended levels of zinc, in addition to other essential trace minerals and vitamins. CRYSTALYX® Sheep-Lyx™ helps to combat existing deficiencies by delivering highly available, organic forms of zinc, manganese and selenium. This combination helps sheep build adequate body stores needed not only for hoof health, but also for immunity, lamb development, lactation and rebreeding.

In summary, incidences of foot rot increase during prolonged wet weather. There are many management practices that you can employ to reduce foot rot on your farm. Included among these is proper supplementation of zinc. Many sheep show deficiency symptoms including: depressed immunity, decreased conception rates, increased days open, and hoof problems. If your sheep experience any of these symptoms, you should strongly consider use of one of the CRYSTALYX® supplement products to deliver recommended levels of zinc to help sheep reach their maximum genetic potential. 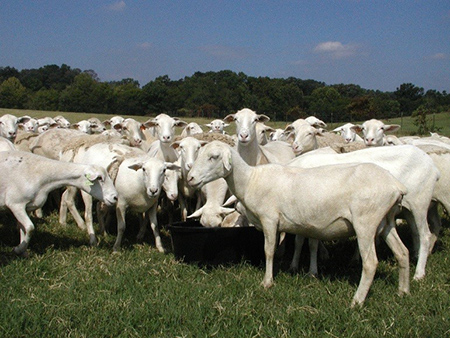