Today’s cattle are performing at much higher levels than cattle just a few decades ago. We have weaning weights that are pushing 50% of the dam’s weight and fed cattle in top performing feed yards that are exceeding 4 lbs./day for average daily gain (ADG). We are just learning about all the factors involved in helping these animals reach their full genetic potential. Other blogs have discussed fetal programing as related to protein and trace mineral nutrition of the cow during pregnancy and the impact her plane of nutrition has on the developing calf in utero and performance later in its life. In this blog, I will attempt to discuss the impact of chelated trace mineral supplementation on antioxidant status of growing cattle without getting too deep in the biochemistry.

A recent article in the October 2017 Bovine Veterinarian magazine discussed chronic oxidative stress (COS) in late stages of fed cattle and the possible role chelated trace mineral have in improving oxidative balance. The article cited a study where 83.9% of the cattle at harvest showed signs of chronic oxidative stress. In the veterinary and nutrition world, we like to use collective terms to describe complex metabolic disorders and COS is a good example. COS can lead to reduced ADG, increased risk of pneumonia, cattle fatigue syndrome and several other disorders. COS in general is the reduced capacity of the body’s antioxidant system to neutralize metabolic toxins generated during energy metabolism and the oxidative burst of the immune system.

The cells of the body are in a constant metabolic balancing act as related to the metabolism of oxygen.  The energy producing pathway of the cell will generate reactive oxygen species (ROS) that must be detoxified by the cell’s antioxidant system. The immune function of the body also uses ROS to destroy bacteria and other pathogens in a process called the oxidative burst. This is basic oxidation reduction chemistry. The oxygen gets oxidized to a ROS called super oxide. Oxidation is the process of removing 1 electron. ROS will try to get back to a neutral state by pulling an electron from surround molecules, fatty acids or proteins. These then become a ROS and try to get an electron from somewhere. If left unchecked, this chain reaction causes damage to the internal components of the cell or damages the cell wall. The antioxidant system is responsible for maintaining a balance in the cell and preventing this damage.

Several trace minerals and vitamins are crucial in the antioxidant system, mainly selenium, copper, zinc and manganese along with vitamins A, C and E. The trace minerals are part of enzymes that have specific roles and the vitamins act as electron donors to stop the damaging chain reactions. The figure below depicts how these nutrients act in concert to detoxify the ROS. Super oxide is one of the most potent ROS species and is reduced to hydrogen peroxide (H2O2) by a copper, zinc and manganese enzyme call super oxide dismutase (SOD). H2O2 is then reduced to water by a selenium containing enzyme call glutathione peroxidase (GSP). These reactions are taking place in every cell of the body. The higher the performance, the more of these reactions are required. If the concentration of super oxide or H2O2 is excessive the cell wall can be damaged by the formation of fatty acids free radicals. The vitamins A, C and E can work as electron donors in the cell wall to prevent this chain reaction. 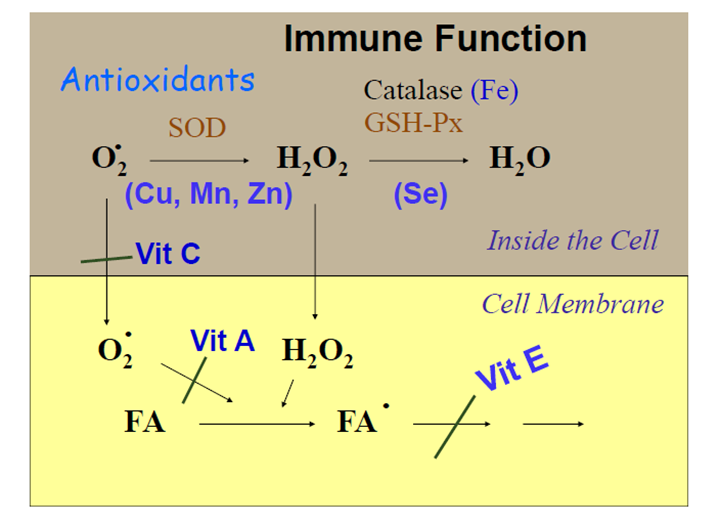 We have long recognized the need for better fortification during times of stress when immune function may be impaired. The CRYSTALYX® stress fighting formulas and Breed-Up® line uses the chelated trace minerals for this purpose. The CRYSTALYX® Blueprint® line is an evolution in the thought process related to trace mineral fortification. With the genetic potential of our cattle today it is critical to maintain a high level of antioxidant status. Using all Bioplex® chelated trace minerals as the sole trace mineral source allows for a lower total level of fortification, but with enhanced total availability. Bioplex® trace minerals are in the same form as found in plants which makes them more easily absorbed and transported in the body. When the enzymes and vitamins perform their antioxidant role as described above, they are spent and need to be replaced, therefore a consistent supply is critical. The CRYSTALYX® Blueprint® line offers the latest technology in trace mineral nutrition to support the growth potential of today’s cattle.

Bioplex® and Blueprint® are registered trademarks of Alltech