The primary difference between inorganic and organic sources is the form of the mineral. Inorganic minerals are bound to an inorganic salt — typically, sulfates or oxides — while organic trace minerals are bound to organic molecules like amino acids or proteins. The organic form is similar to the form in which minerals are stored by both plants and animals. Since organics are most like the form of those found in nature, they are readily absorbed and utilized by the animal. 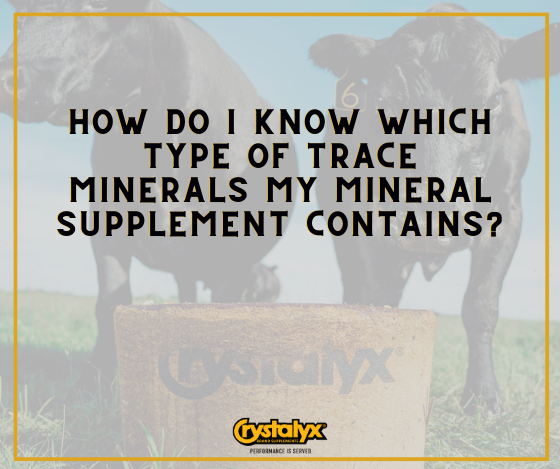 Providing inorganic trace minerals in high levels can also result in antagonisms. Mineral antagonisms occur when an excess of one mineral affects the absorption or utilization of another mineral. For example, high levels of zinc will reduce the absorption of both copper and manganese. As such, high levels of inorganic zinc supplementation result in the need for higher copper and manganese supplementation as well to prevent a deficiency.

Mineral stability also affects the integrity of other nutrients included in trace mineral supplements. As products are stored, nutrients can start to lose their integrity and degrade. Inorganic minerals are less stable during storage and can oxidize before the product is ever fed. This oxidization leads to the degradation of other nutrients — specifically vitamins. The use of organic trace mineral supplements has been shown to protect the integrity of vitamins by 10–30%, depending on the vitamin type and the length of storage time, compared to the use of inorganic trace minerals.

Lower bioavailability means that fewer minerals are being absorbed and utilized by the animal. If the minerals consumed are not absorbed by the animal, they are excreted into the environment. The higher mineral formulation required when supplementing with inorganic trace minerals leads to more minerals being excreted into the environment. This creates concerns about soils or water sources being contaminated by those minerals.

Organic trace mineral supplementation has been shown to improve pregnancy rates and to support herd health, and it is also correlated with heavier calf weaning weights. These are all factors that result in greater economic returns for the producer. Does the additional cost of switching to all-organic trace minerals pay for itself? The short answer is yes! Commercial beef producers have seen an average ROI of 3:1 with organic trace mineral programs. 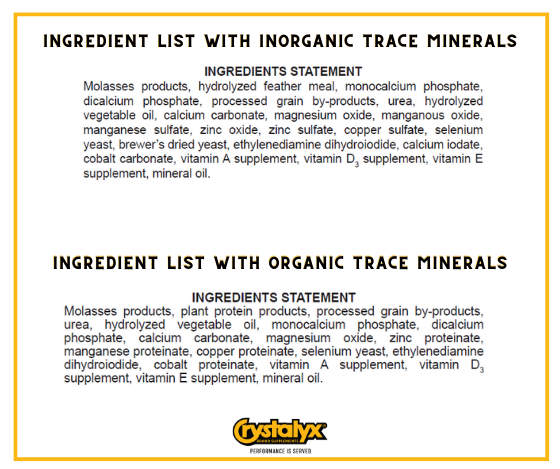