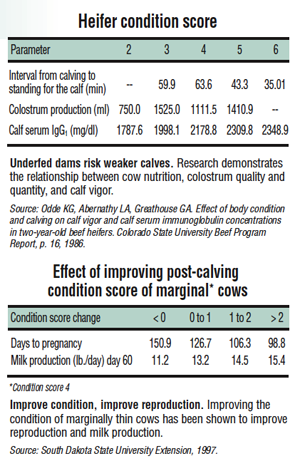 Feeding cows and heifers to maintain the ideal 5 or better condition score going into calving sets the stage for a whole season’s productivity:

They also took more time to stand after calving than those from dams getting adequate protein.

During the last sixty days of pregnancy, cows generally must get at least two pounds of crude protein daily, plus sufficient energy to maintain fetal growth and development. Heifers need particular attention, both before parturition when they are still growing themselves, and after calving, when new strategic use of rumen-bypass protein has been shown to improve body condition without sacrificing calf growth. Pre- and post-calving nutrition sets the tone for cow herd productivity

Ensuring cows and heifers have sufficient nutrition to maintain and improve condition in the last 50 to 60 days of gestation improves these critical productivity measures:

Short your cows nutritionally in the last 50 to 60 days before calving, and you risk:

It’s foolish to cut corners or to cut back on nutrition.