I had the opportunity to attend two beef industry gathering events this past week that brought together producers and beef industry partners in the plains and western United States. The first was the Outlook and Strategies Seminar offered by CattleFax that painted current and future economic opportunities in the beef cattle business and our overall economy. There were a number of talks that covered a wide variety of topics impacting the beef industry. The bottom line…  It is a great time to be in the beef cow-calf business! This also has strong signals that it will not just be a year or two but indications are that it could last three to five years before market conditions begin to fall. Now, there are always regional issues that can crop up, like the recent drought in the Southern part of the U.S., in addition to other environmental or economic factors that can temper just how good of a ride the cow-calf segment of the industry will have, but right now I would have to say the future has never looked so bright!

The other event, which is always a great producer gathering in the cow-calf business, was the Range Beef Cow Symposium held in Mitchell, Neb. The Cooperative Extension Services sponsor this symposium that is held every other year and rotated between the four states of Nebraska, South Dakota, Wyoming and Colorado. The content is focused on production systems specific to cow-calf producers and covers a wide range of topics.

There will always be certain events or market factors that could change the potential returns to cow-calf producers but more than likely plans should be made based on calf prices that are expected to average $175 per cwt. based on a 550 lb. steer calf for 2012. There are also indications or times of the upcoming year where projections closer to $200 per cwt. might be expected (see attached chart). CattleFax has shown that cow-calf producers have not only been profitable since 1997 but in  the next few years they will have record profits that could range between $200 and $300 per head or higher. These profits are well over three times what producers enjoyed within the last decade. 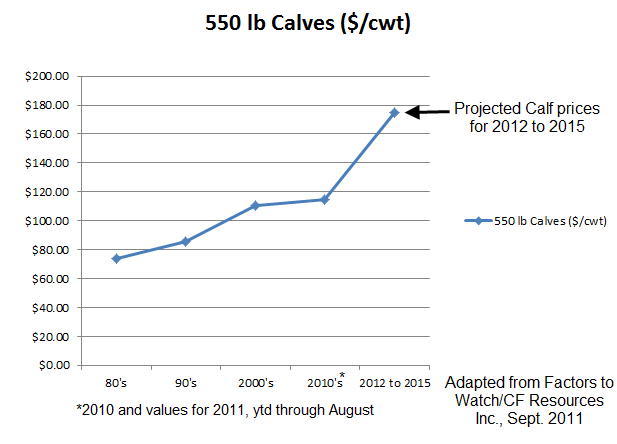 If you have gotten to this point in the article, this is generally where many start pointing fingers to increased costs associated with inputs like feed, supplements, animal health products, fuel, cash rents, etc. There is no question that production costs have been on the increase as well. Many of the feed or supplement cost increases are a direct result in higher commodity prices that farmers are receiving for the cereal grains that they produce. Because the cow-calf industry is primarily dependent on forage systems, those producers who own or have access to low-cost forages, which can also include crop residues, will be more insulated from increases in feed costs when compared to the feeding segment of the industry. Of course, extended drought conditions can cancel this advantage once you start trucking feed to maintain a cow herd. Even though there may be some increases with inputs, the prices that cow-calf producers are projected to receive will more than outpace the increase one can expect with input costs.

So what does all of this mean to cow-calf producers. It certainly doesn’t mean that you can become more careless or pay less attention to the details of running a profitable operation. At the same time, I would say that the criteria you used to make decisions in the past, may not provide the same conclusions when you pencil in $1.75 or $2.00 calves.

Return on investment (ROI) for inputs or practices where you might have questioned their returns in the past, may now be something you should definitely be considering. One example might be simply the total value of calves. How many open cows, fewer cows calving in the first 21 days, lighter weaning weights or sick calves can you afford when they are worth $1050 versus $720 per 600 lb. calf ($1.75 vs. $1.20/lb.)? Inputs that can help you achieve added weaning weights or healthy calves are more important now, than they ever were with the dramatic increase in calf value.

Nutritional supplements, preventative health inputs, feed additives or management practices that can make sure cows produce a healthy calf and breed back as early in the breeding season as possible, more easily pay for themselves in addition to increasing calf value with improved health and/or added gains. These inputs are not only confined to the cow-herd. Supplemental inputs for stockers on forage-based growing programs should also be evaluated for improving returns. I would challenge you to take another look when your local animal health or feed rep pulls into your yard. Current beef industry economics dictate that you reevaluate the potential returns and would highly recommend that you take the time to do the math!