With the high price of nitrogen and today’s economy, let’s face it, pastures and hay fields don’t always get fertilized like they should. But other than harvesting fewer tons of forage, it doesn’t really matter that much, right? Or does it? What if you knew that lack of nitrogen fertilization directly correlated with Fescue Toxicity symptoms?

Research has shown that the presence or absence of the endophyte directly affects not only the copper level in fescue, but also the bioavailability of said copper. 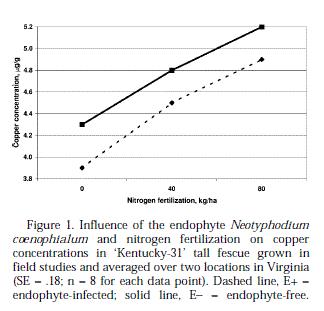 So what does all of this mean?

This is a case of “pay me now or pay me later”. If economics prevent you from properly applying fertilizer to fescue pastures or hay fields, know that the copper levels in these resulting forages (pasture or hay) will be especially low. Under these circumstances, supplementation with a highly fortified mineral supplement will be critical to maintain acceptable performance. Compounding a lack of fertilization with a lack of proper mineral supplementation can result in profound consequences for years to come including: unthrifty calves that do not grow well, open cows at preg check time and delayed breeding in replacement heifers and bulls, resulting in reduced lifetime productivity.

How Can I Provide Enough Copper for My Cattle?

The key in providing adequate copper is to provide access to a self-fed mineral supplement that contains sufficient copper. The amount that is sufficient will vary according to current mineral status of your cattle, soil mineral levels, season, breed of cattle, etc. Do not skimp on mineral supplementation during spring and summer months when forages are green.

In summary, copper deficiency is closely related to the development of fescue toxicity symptoms in endophyte-infected fescue. Lack of nitrogen fertilization exacerbates the copper issue as nitrogen is needed for the plant utilize copper in its own tissues. If fescue forages have not received recommended levels of nitrogen fertilization, it is especially critical that you provide a high quality mineral supplement containing adequate copper. CRYSTALYX® offers a variety of supplement blocks formulated specifically for fescue forages. Visit www.crystalyx.com to learn more.