Internal parasites in cattle reduce feed intake, reduce average daily gain and alter the animal’s immune system. Expensive nutrients fed to sustain cattle are diverted to sustain the parasitic organisms instead.  If one waits until clinical symptoms appear, the damage has already been done and the animal has been inefficient for quite some time. Therefore, the time to deworm is in the subclinical stage before major damage has been done and money has been lost due to poor productivity. 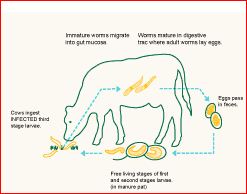 In order to control internal parasites, one must understand their lifecycle and how they are transmitted to cattle. Luckily, most of the economically important internal parasites (roundworms, stomach worms, barberpole worms, etc.) have similar life cycles (See Figure 1). The adult nematodes mate and produce eggs within the host. These eggs pass out of the gut in the feces. The eggs hatch, and the larvae go through several stages before they reach the infective stage. This infective stage migrates from the manure pat onto moist grass (See Figure 2) where it is consumed by the host then the larvae mature into adults, completing the lifecycle. It is important to note that these larvae need moisture (from rain or dew) and soil temperatures of 55° - 85° F to swim up the blades of grass. As the grass dries, the larvae move back down into the soil. Cattle do not pick up larvae from dry pastures. Thus, the warm, wet conditions we’ve experienced this summer have been ideal for internal parasite transmission. 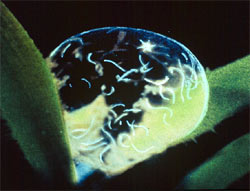 Figure 2. Infective larvae found in a drop of dew. (Taken from Langston University)

Control of internal parasites is a never-ending battle that entails a combination of pasture management and strategic use of anthelmintics. Control should be aimed at reducing exposure to infective larvae and disrupting the life cycle. Control practices include the following:

Move susceptible cattle to “clean” pastures. Clean pastures are those that haven’t been grazed by other cattle for at least 12 months, since larvae can survive for up to a year in pastures.  Rotating pastures with other species (horses, sheep or goats) also acts to clean pastures, as these parasites are species-specific. When the larvae are ingested by anything other than cattle, they will die harmlessly in the gut.

Do not over-stock pastures. Over-stocking pastures forces cattle to graze closer to the ground and thus pick up more larvae.

If forced to use pastures that aren’t “clean”, refrain from turning cattle out on new grass until the dew dries.

Strategically use dewormers, especially prior to calving and/or moving to new pastures.

Periodically have fecal egg counts conducted to assess if your current deworming program is effective.

There are many anthelmintic products on the market to choose from. Safeguard® is one example of a de-wormer product line that has several methods of self-fed delivery products.   Self-fed delivery of dewormer through a block form has many advantages over other delivery methods. First, drenches, injections and pour-ons require that cattle be worked in a chute. Not every producer can afford to purchase expensive catch gates and chutes. Also, there are inherent stresses placed on both cattle and humans when cattle are worked, especially when cows are in late pregnancy and/or temperatures and humidity are high. Lastly, there is the safety issue of working cattle in close quarters, especially when utilizing inexperienced help. 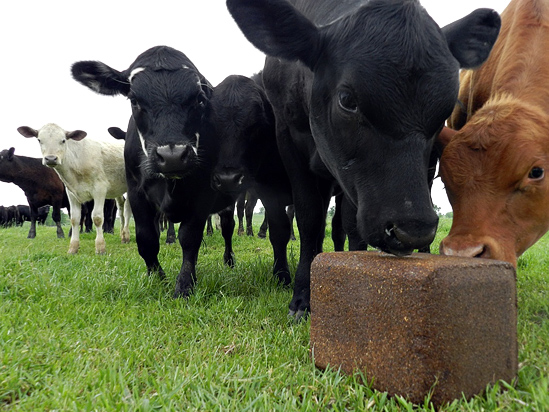 Figure 3. Self-fed deworming blocks don’t involve running cattle through chutes.  This could be an ideal method for heavily pregnant cows or producers without access to chutes or working facilities. Carefully read label directions or consult with your local veterinarian to see if this method is right for you.

In summary, the warm, wet summer we have just experienced has provided ideal conditions for the transmission of internal parasites. Control of these internal parasites will depend upon a combination of pasture management and strategic use of dewormer products. No matter which anthelmintic product you choose, deworming cattle this fall will be critically important to maintain productivity over the winter. Consult with your local veterinarian to determine the anthelmintic program that is best for your situation.

Safeguard® is a registered trademark of Merck Animal Health