In many areas of the central and northern plains states, spring has sprung early this year. I’ve heard locals in these areas comment that grasses, trees and shrubs are anywhere from 2-4 weeks ahead of normal; certainly the temperatures would agree with that. I was in the Canadian province of Ontario the last week of March and I heard that some folks had already planted small grains and even corn, just to say they did it in March. Grass (native or tame pasture) is truly a crop and livestock are the harvesting equipment. With the early spring and green up occurring, it is tempting to let the grazing begin now. High forage costs also make it tempting, but let’s take a closer look.

Grazing management systems, philosophy and strategies are numerous. Combining these with Mother Nature’s unpredictability to match grazing management with livestock requirements and production is a complicated task. My grandfather used to say that in life or in agriculture, “It’s hard to get everything just right.” No matter the grazing system, it is important to understand some basics of plant morphology to minimize any negatives of improper grazing and to help better improve productivity from forages. Good grazing management in the spring actually begins the previous fall. Much like a cow that begins the winter in adequate condition does better at calving and subsequent breeding in the spring, grass that went dormant in the fall with adequate leaf area to produce and store energy in root reserves will survive the winter successfully and begin productive growth in the spring. Grasses produce energy via photosynthesis and need leaf surface area to do so. Growth of grass in the spring has a priority over storage for energy, and this is one reason overgrazing will deplete a plant’s energy reserves.

Forage production can be dramatically reduced (35 percent or greater) for the grazing period if native pastures are grazed too early in the spring. Too early is prior to when there are four fully developed leaves (shoots or tillers) that provide surface area for achieving positive energy balance within the grass plant. Grazing too early in the season is basically a form of overgrazing. Too much leaf material grazed (especially at the crown of the plant or below the growing point) will slow plant growth, require the plant to draw on more stored energy in the roots, impair root growth and development and make the plant much more susceptible to drought or competition from non-desirable species, i.e. weeds. Again, the end result is less production and less forage not only for the current grazing season but for subsequent seasons as well. 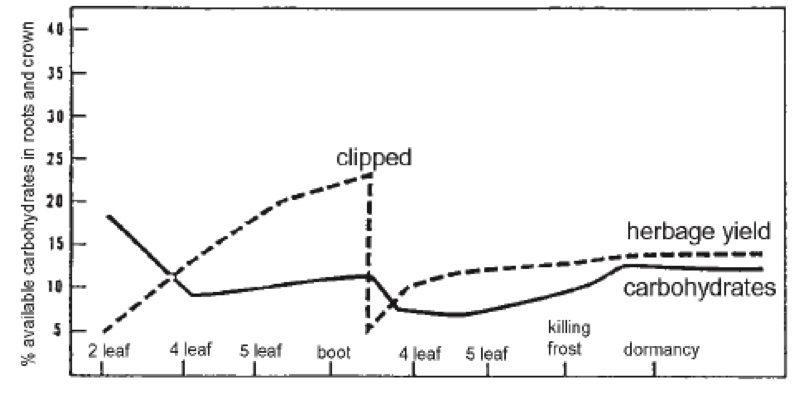 So, it’s just now early April. Don’t get in a hurry just because the weather has felt like early May. Typical April weather may likely return with cool night time temperatures that will slow down this early grass development. Plus, many areas in the northern and central plains are dry and this certainly doesn’t help the grass situation. If it stays dry, grazing too early now will only make a bad situation worse.

Most beef producers in the central and northern plains are used to still feeding this time of year. We all can remember some major April snow and cold events. Even though forage costs are high, we still need to be making best use of our stored forages or crop residues, at least for a few more weeks or until we have adequate grass growth.