Many publications about pregnant cow nutrition note the changes in nutrient demand during pregnancy, calving and lactation. Nutrient needs are the highest at about 60 days post-calving — primarily because of peak or near-peak lactation — and then slowly decline as a calf grows and starts to consume more and more of its diet from feedstuffs rather than milk. Assuming weaning occurs around the time a calf is seven months of age, the nutrient demands for a cow are at their lowest at that point and won’t climb again until she is in her late second trimester, moving into her third. From month to month, these changes in nutrient needs may not look like much, but between the low levels and high levels, energy requirements change by more than 50 percent and protein needs by more than 75 percent. In addition, some mineral requirements can nearly double in need, depending on the stage of pregnancy or lactation. These statistics are the averages taken directly from the National Research Council (NRC) for a 1200-lb. cow. Cow size and age and changes in the weather can influence these numbers even more. 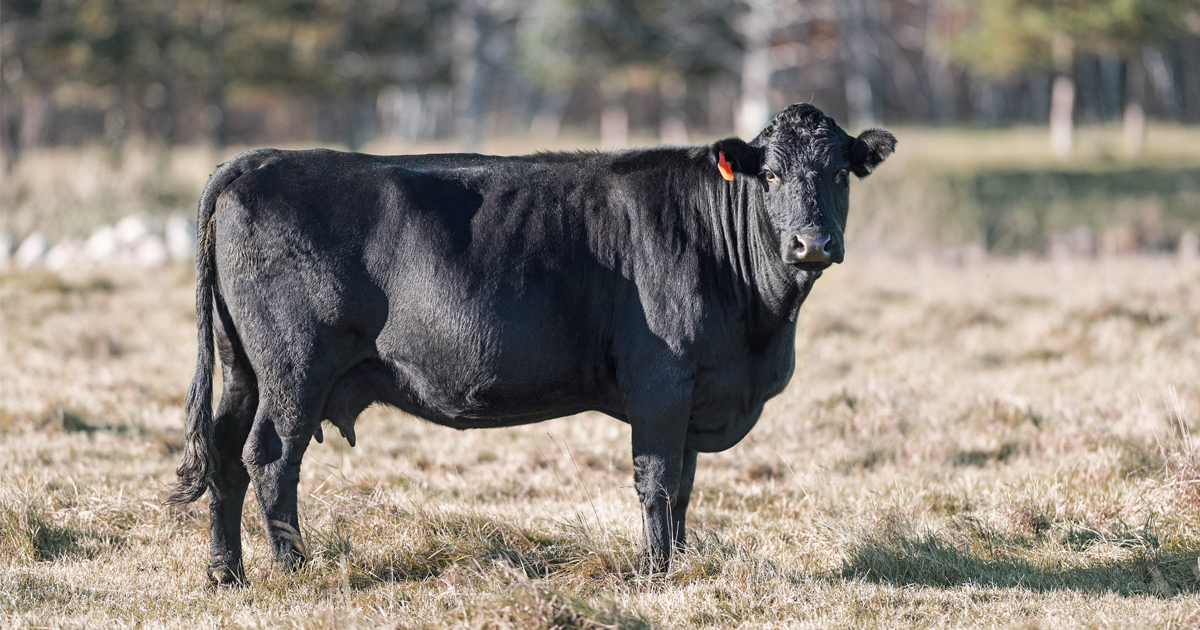 Let body and forage conditions be your guide

In the U.S., beef cow body condition can be scored or evaluated using a scale of 1 to 9. The Canadian system uses a scale of 1 to 5. Either way, the concept is the same. I like to mention the Canadian system for its practicality, and also because we have many CRYSTALYX® users and blog subscribers from Canada. Both scales use a range that falls between extremely thin and extremely fat. Most cattlemen will agree that the optimum condition score falls between 5 and 6 on the U.S. scale. Evaluating body condition, or “scoring cattle,” is a practice every cattle producer should be in the habit of doing on an ongoing basis. There are some key times of year when it makes the most sense, particularly during calving, breeding, weaning and in mid- to late gestation. Some of our past blog articles have mentioned the CRYSTALYX Beef Cow Body Condition Scoring App for smart phones. It’s a convenient, easy-to-use tool that allows you to keep BCS records readily available for comparing and tracking the condition of cows throughout an entire season or year. The app also stores photographs and allows you to note small changes that may add up to more obvious changes in condition score over time. If you are observing cattle daily, these small changes might otherwise go unnoticed.

When making nutritional and other management decisions for a cowherd, remember that body condition affects everything from bred cow nutrition to performance. I will comment below on some of the important parameters to note in relation to calving season.

As mentioned above, nutrient requirements are the lowest mid-gestation. If cows are thin due to drought, heavy lactation or other non-health reasons, gaining condition at this time is relatively easy, provided the calf is weaned and an adequate forage resource exists. Using a protein supplement like CRYSTALYX can be very beneficial during this time, which is generally the moment when a supplement is the most effective. However, both the body condition and the age of the animal can affect energy requirements, especially in younger cows and heifers. Younger animals are still growing and simply need more feed; for example, a 1,000-lb. bred heifer entering her third trimester needs about one additional pound of TDN (energy) compared to a 1,200-lb. cow going through her third trimester. When provided earlier, at a higher level or with more escape or bypass protein, protein supplementation can be more beneficial to younger animals who are still growing. As cows approach calving and enter lactation, the energy needs for those of different ages become more similar.

For thinner cows and heifers, the energy requirement is even higher to begin with; again, it’s about one pound more than cows in adequate body condition. There are several reasons for this increased energy requirement between thin and moderately-conditioned cows: thin cows have less fat and are affected by cold temperatures more, and they also lose more muscle mass when losing weight. Burning fat and, especially, mobilizing muscle tissue to meet energy requirements are very inefficient metabolic functions. Researchers in Wyoming have compared, via ultrasound, the ribeye areas of thin cows versus cows in adequate condition, and according to Dr. Steve Paisley at the University of Wyoming, thin cows have a much lower ribeye area. Overall, it is difficult for a cow doing poorly in winter to gain body condition without a lot of feed and expense.

In all ruminants, colostrum is key to initially building the immune system in a newborn animal. Beef calves are essentially born without an immune system, and the first immunity they receive is through passive transport via immunoglobulins in their mother’s milk. Numerous studies have shown the impact of nutrition on colostrum quality, which is measured by its immunoglobulin or antibody concentration. I’m of the opinion that we must be very mindful of this when developing supplement strategies in bred cows, since the first few hours of a calf’s life may be the most important of all. How well a calf gets started subsequently impacts its health and performance throughout its lifetime. Several recent studies from the University of Florida have demonstrated that not only the amount but also the source of trace minerals fed can affect colostrum quality, with organically sourced trace minerals having the most positive impact. Feeding Bio-Mos® during the last 45 days of gestation has proven to support colostrum quality. Several CRYSTALYX programs can be recommended both pre- and post-calving, such as the Blueprint® and Breed-Up® product lines, which provide Bioplex® organic trace minerals and include options with either Bio-Mos or Actigen®.

Thankfully, these days, people don’t comment as much as they once did that supplementing cows prior to calving causes calving difficulties. This is a myth. While overfeeding and fostering fat cows may cause more instances of dystocia, underfeeding or maintaining poorly-conditioned cows is a larger concern. Thin cows can be weaker, have more calving difficulty, and birth more calves with weak calf syndrome or who are generally less thrifty. Adding this stress to other factors — like poor colostrum quality and poor mothering ability because of cow weakness — almost guarantees that calves born to thin cows will be penalized from birth. More seriously, cows in thin condition at calving will suffer from poor reproductive performance; they often fail to conceive or have a much longer postpartum interval (i.e., they breed late).

Focusing on the body condition of beef cows is a starting point on the road to improved beef cow nutrition. This and forage quality usually dictate what type of supplement or supplement strategy to use. Body condition and forage quality are important at any time of the year, but they have the biggest impact on herd profitability in pre- and post-calving and breeding programs. Many cattle producers are gearing up for spring calving now, although calving seasons at this time of year are perhaps no longer as traditional as they once were. Spring calving may be defined as any time from January to June, and fall calving may happen between August and December. No matter when your calving season occurs, the same principals of body condition and beef cow nutrition apply. Health costs and lost opportunity costs due to poor nutrition programs in pre- and post-calving are significant. There’s not a worse time for a cow to be thin or nutritionally compromised. Remember: it pays to take care of the cows that are responsible for paying your bills. 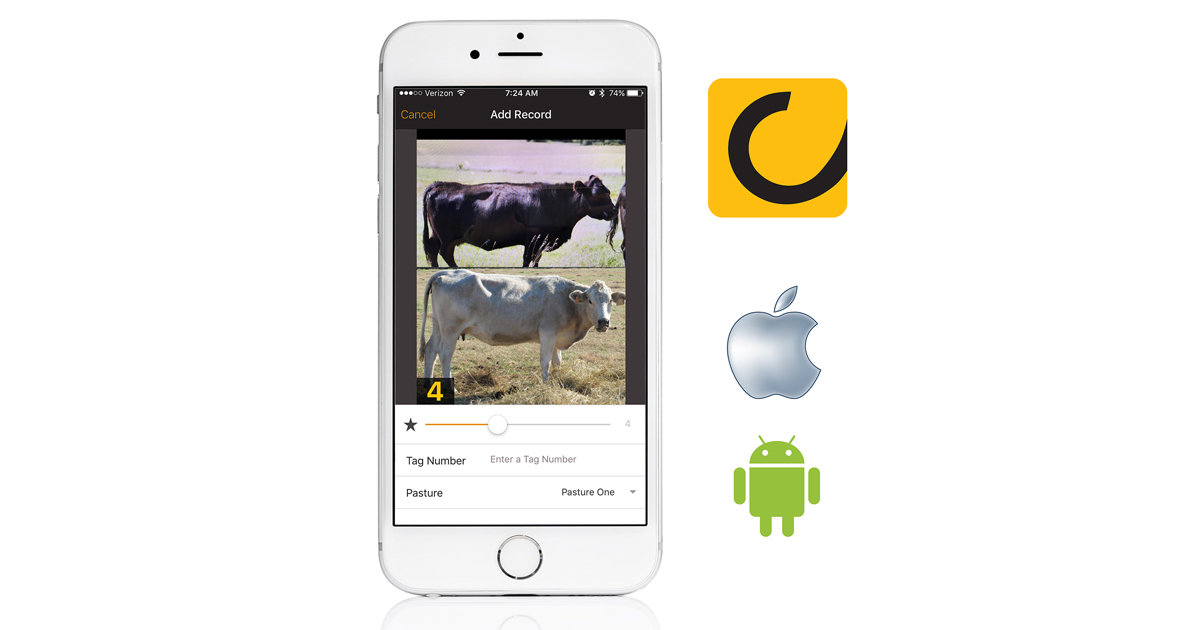