A common practice in the fall and winter is to graze crop aftermath residue, such as corn residue following harvest. There are numerous blogs, popular press articles and extension bulletins about such practices, and some make them sound somewhat novel — but these practices are anything but new. I recall filing through some old notes my father had written in the late 1970s, when he was helping a rancher friend in the Nebraska sandhills find cornstalks to graze in eastern Nebraska during a drought year. Grazing cornstalks has likely been around as long as cows and corn have been raised in the same areas, albeit a lot has been learned over the years, and both cows and corn have changed a lot, too. 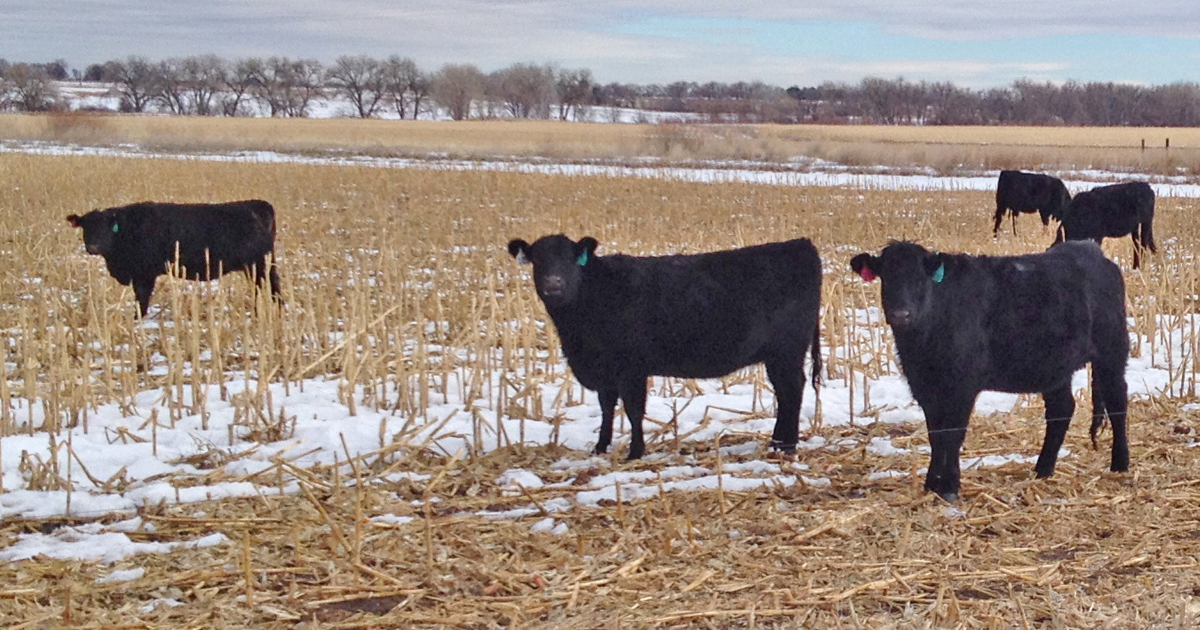 What are the stocking rates, and how much feed is available?

Two amounts that need to be determined are the quantity and quality of the corn residue feed resource. For the remainder of this blog, I’ll refer to corn residue in the more common lingo, which is “cornstalks.” For years, a conservative rule of thumb is that there’s about 1 month of grazing per cow per acre of cornstalks. This rule still stands true, but it may be somewhat outdated in areas with today’s average to better-than-average corn crop yields. The amount of forage available in cornstalks is directly linked to the yield of grain the crop produces. There’s about 16 pounds of leaf and husk residue per bushel of grain produced, and most guidelines suggest that about half of that, or 8 pounds, is available for grazing. So, with today’s yields closer to 150 bushels per acre nationally, the rule of thumb is about 1 ½ months grazing per cow per acre. A 200-bushel yield would translate to around 2 months of grazing. Also keep in mind your cow size. Cornstalk residue, while valuable, is relatively high in fiber, to the extent that beef cows will consume, at best, 2% of their body weight. So, a 1,300-pound cow is going to consume approximately 26 pounds of corn residue per day. This, however, can be improved by using a supplement like CRYSTALYX®.

Corn waste grain left in the field from ear drop due to wind or disease, from combines or due to spillage from grain carts and trucks, among other reasons, can be significant and should factor into stocking rate decisions. Cows — especially older cows — with a history of cornstalk grazing will seek out waste corn during the first couple of weeks of grazing. This does give more energy and will improve the diet quality for a short period of time; however, excess amounts of waste grain will warrant some management changes, such as strip grazing or heavier stocking rates. A good article from the University of Nebraska’s beef website addresses this issue.

So, what’s the value of supplementing cattle while grazing cornstalks?

Autumn is the best time of year for most beef cows. The weather is usually moderate, fly pressure subsides, and in spring calving systems, cows are in the middle of gestation. Also, if calves are weaned off of cows, the nutrient demands are low. It’s a good time of year for beef cows to add or at least maintain body condition.

The grazeable portion of corn residue — namely, the husk and leaf material — offer 6% crude protein or less and 55% or less TDN. This is marginal nutrition, even for a cow at maintenance, as far as meeting its protein and energy requirements. Early in the grazing period, the additional corn grain waste left in the field can provide a substantial amount of energy, but overall, the diet is going to be classified as mid- to low-quality. As such, at least on paper, these diets would warrant a supplementation strategy that provides protein.

There’s an old saying in the feed business: “Your biggest competition is the producer doing nothing.” Not to knock any livestock producers, but there are times when a supplement needs to be provided and it’s not. There are lots of reasons for this, ranging from ignorance to management to practicality, but my guess is that there’s probably a significant number of cows that graze cornstalks that could benefit from an effective supplement, like CRYSTALYX, but that aren’t getting anything.

The University of Nebraska conducted a 3-year study that evaluated two winter grazing systems: two spring-calving herds grazing cornstalks from December 1 through the end of February, with one herd offered a protein supplement and one not. The cows that were offered a protein supplement did have better body condition scores at calving, but there were no significant differences in cow pregnancy rates in the subsequent breeding season. This study also evaluated several parameters to determine the possible fetal programming advantages of supplementing protein to cows in mid- to late pregnancy — more specifically, how supplementing cows during pregnancy affected the performance of the subsequent calf crop. No real difference was found in calf weaning weights, but the heifer calves from supplemented cows that were further developed as replacement heifers did have a higher pregnancy rate. Additionally, once finished in the feedlot, the steers from supplemented cows had a higher percentage of choice-quality grades than the steers born to non-supplemented dams.

This Nebraska study may lead some to conclude that supplementation is not necessary when cattle are grazing cornstalks. I don’t think the researchers of that study, nor any nutritionist, would suggest that supplementation to cows on cornstalks is always unnecessary. There were some benefits provided regarding fetal programming effects, and plenty of other variables can affect a cow’s performance and the need for supplementing in a cornstalk winter-grazing system. Consider your cow’s body condition prior to grazing cornstalks, as well as the stage of pregnancy. Also consider the quality of the cornstalks and how much they’ve weathered during the winter or have been trampled in the ice, snow and mud.

Another reality to consider is that some producers may bend the rules of thumb and graze a certain cornfield too long or beyond its optimum level. If cows are forced to consume the stalk or stem portions of corn residue, then it’s likely time to move them to another field or offer them supplemental feed. Cow maintenance requirements may also be increased while grazing cornstalks due to weather. Not many cornfields in the Great Plains offer much protection from wind and storms, and cows may have to travel a mile or more to reach a common water point or loafing/shelter area. The point to be made here is that forage, environmental conditions and management during a winter cornstalk grazing season are often less than ideal. In these situations, a supplement is going to have a larger beneficial impact.

Several years ago, when GMO varieties were fast being adopted, you would hear from corn farmers and cattle producers alike that cattle grazing cornstalks from GMO varieties don’t consume the residue as well or simply don’t fare as well on these varieties. I’m not sure if the same sentiment exists as much now, but there was a study completed at Iowa State University and published in a 2017 Animal Industry Report that evaluated the chemical composition, intake and digestibility of several GMO varieties versus conventional brands. The researchers reported that the GMO varieties evaluated were lower in both ADF and NDF fiber levels but were higher in lignin content than conventional varieties. This translated to cows consuming higher amounts of the GMO-variety corn residue but having a lower digestibility of the fiber content. The higher lignin level would likely have been the reason for decreased digestibility and makes a further argument for the advantages of a supplement. While the data reported was significantly different, the researchers concluded that with the vast number of different corn varieties, brands and hybrid traits in a single isoline, more research is needed to truly evaluate any difference in the feed values of corn residue between conventional or GMO varieties.

So where does CRYSTALYX fit, and what CRYSTALYX products work best on cornstalks?

If you have cows grazing cornstalks at any point during the fall or winter, using a CRYSTALYX supplement will provide performance benefits. It’s good insurance to maintain cow body condition, and any potential fetal programming benefits in the next season’s calf crop are a bonus. One of our most popular winter grazing CRYSTALYX products is BGF-30™; it’s a great choice for cornstalk grazing, offering 30% crude protein and a balanced vitamin trace mineral package. Other good choices include our CRYSTALYX®  Breed-Up® 28 and/or Blueprint® 30 products, which have a more advanced trace mineral program that many producers are now adopting. We’ve discussed the Blueprint® mineral programs in several previous blogs, and Blueprint nutrition can be applied in cornstalk grazing systems as well. These products also have formula options that include Bio-Mos® 2 to help overall gut health and immunity. Using a supplement with Bio-Mos 2 ahead of the calving season provides many benefits to the health of cows and newborn calves.

While mature cows are going to be more efficient and perhaps perform better in a cornstalk winter grazing system, younger cows and replacement heifers/yearlings are going to have higher nutrient requirements. The products mentioned above for mature cows may work well, but if more intake and nutrient uptake is desired, our latest product, CrystalBlox™ — which combines CRYSTALYX and a distiller’s grain compressed block in one easy-to-use package — is a great option on cornstalks. Additionally, if yearlings are being grazed on cornstalks and weight gain needs to be enhanced, consider CRYSTALYX® Iono-lyx®, as it includes Bovatec®, which can improve feed efficiency and gain. This product and the others mentioned above should be considered in any fall grazing programs with yearlings, replacement heifers or any growing class of cattle.

While cows and cornstalks have been around longer than CRYSTALYX, the three go together well in winter grazing systems. Corn crop aftermath is a great feed resource and is truly the winter pasture in many areas where corn and cattle reside together. CRYSTALYX does what a supplement is supposed to do, and that’s to enhance the base feed resource and help improve the efficiency and performance of the cowherd.

Breed-Up products will continue to be my supplement choice.