Minerals don’t get the attention that protein does when cattle producers are formulating rations. Yet without adequate amounts of minerals, the beef animal can’t fully utilize the protein and other nutrients in a ration for maximum breeding efficiency or optimum growth. A feeding program that shortchanges minerals is robbing profitability. 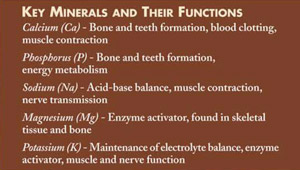 Most cattle producers are aware of the importance of minerals such as calcium, phosphorus, potassium and magnesium in a ration. They are sometimes called macro minerals because a beef animal requires a relatively large amount of each. Macro minerals often have the same function in both humans and cattle. Calcium, for instance promotes bone growth whether those bones are part of a calf or a young adult.

Other minerals are less known, but not any less important. Copper, zinc, manganese, iodine, cobalt and selenium are examples of trace minerals that perform very specific purposes in beef cattle.

Ted Bentley is a firm believer that good nutrition, including proper mineral supplementation, is key to getting cows in shape for the breeding season. CRYSTALYX® Supplements help him get his cows in the best shape possible.

“I artificially inseminate as many cows as I can. We aim to have 90 percent of the cows go through the chute,” the Torrington, WY, registered Charolais producers says. “I’ve got a lot of management and labor invested in them. It’s foolish to cut corners or to cut back on nutrition.”

Copper, along with zinc and manganese, has also been tied to animal health. Calves that receive adequate copper, zinc and manganese have enhanced immune responses. Other minerals, like sulfur, seem to help the beef animal better utilize other nutrients in the ration.

A beef animal doesn’t need large quantities of minerals to meet nutritional needs, but cattle do require adequate levels of each mineral. CRYSTALYX® Supplements are formulated so cattle receive 100% of the NRC requirement for trace minerals.