As part of its decade-long series of surveys on U.S. cattle-management practices, researchers from USDA’s National Animal Health Monitoring Service drew blood samples from cows in 411 operations in the top 23 cow/calf states. Then they measured those 3,902 samples for their levels of two important trace minerals—zinc and copper—to help judge whether the typical operation’s cattle are receiving sufficient levels. 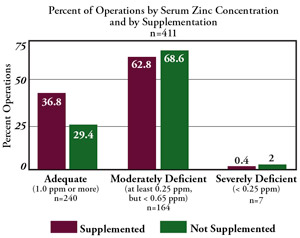 It is important to remember, the research authors point out, that the largest losses suffered by both zinc and copper deficiency are the ones you seldom see directly—lower growth rates, poorer feed efficiency, reduced reproduction and a weaker immune system that leaves calves vulnerable to disease…both on the ranch and in the feedlot. 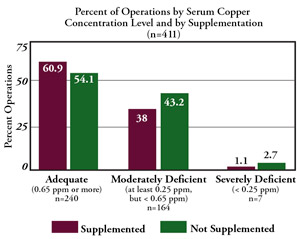 They advise that today’s intensively managed cow/calf operations include regular nutritional analysis to assess trace-mineral status of their animals and forage. Where indicated, adequate quantity and quality of mineral supplementation should be provided.

Bear in mind, though, that the quality of the supplement is important to ensuring adequacy in cattle. The authors of this study noted that even though 63 percent and 64 percent of the study respondents already provided supplemental zinc and copper, respectively, even those supplemented operations showed patterns of deficiency.

Those results point out the fact that not all sources of supplementation are equal. Bioavailability and palatability may differ and thus change the amount of nutrients consumed. Low moisture blocks such as CRYSTALYX® contain a more available form of phosphorous and are more palatable to encourage sufficient intake. 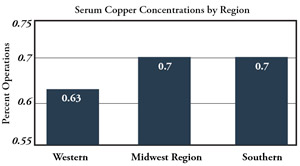 Most decisions to supplement trace minerals usually revolve around the operation’s forage-base quantity and quality. Yet, a similar 1999 USDA-NAHMS survey that sampled 709 forage samples were either marginal or deficient in the key trace minerals. Plus, other work from the mid-1980s shows NRC values may also mis-estimate the expected values for key trace minerals in common processed feedstuffs.

The BioBarrel sure is easy to use.