Past research has shown that supplementing low-quality forage with grain can lead cattle to eat less forage—and also digest it less efficiently. On the other hand, feeding a protein supplement increases both the intake and utilization of low-quality forages. 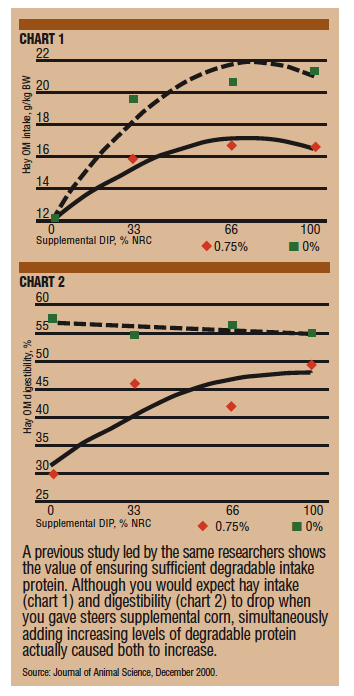 Research has demonstrated that you don’t necessarily have to give up the economic advantage of grain-based supplementation. A series of studies from Oklahoma State have shown it’s possible to use the relatively cheap energy source in corn and other high-starch supplements without wasting forage, as long as your supplement balances protein based not on crude protein, but instead on the degradable-intake protein requirements of the animals. Degradable intake protein is the particular class of protein that’s digested in the rumen, to fuel the rumen process.

The Oklahoma State researchers supplemented growing heifers and steers eating standing bermudagrass and prairie hay, respectively, with 0.42 percent of their body weight daily in high-starch pelleted supplements. That amount was equivalent to levels in past research that caused a decrease in forage intake.However, because they made sure to provide sufficient degradable intake protein—from one-half to three-quarter pound per head daily—they did not see the drop in forage intake or digestibility of those previous studies.The authors suggest many of those past studies removed oil-seed meal as they added corn in re-balancing the supplements, thus starving the rumen of the degradable protein needed to create ammonia necessary for efficient forage digestion.

A study reported earlier this year from the University of Nebraska serves as a reminder that paying attention to the level of protein that escapes breakdown in the rumen—or “undegradable intake protein”— is also important, especially in developing females. The study found that heifers supplemented to meet their “metabolizable protein” requirements, which takes into account their need for undegradable intake protein rather than simply their crude protein requirements, weighed nine pounds more and had a higher pregnancy rate at a two-year-old preg check, and lost less body condition pre-calving and at first-calf weaning. All told, the improvements added $13.64 to the value of each bred heifer.

The BioBarrel sure is easy to use.