Building off of Jon Albro’s blog from last week, I too had some interesting observations from the NCBA Cattleman’s College.  One Researcher provided some information on the intake variation of self-fed, as well as hand-fed supplements.  Most notably it was stated that the percent of non-consumers of hand-fed supplements was probably around 5%.  Non-consumers of blocks was said to be in the 15% to 19% range, with non-consumers of liquid supplements somewhat higher than blocks.  The citation given for this work was that of Bowman and Sowell 1997 (J. Anim. Sci. 1997. 75:543–550).  I was somewhat familiar with this work, as it is one of the few published accounts of self-fed supplement intake variability, even yet today, some 19 years later.  When reviewing the paper, averages for non-consumers are: Dry hand-fed Supplements (12 studies compiled) = 14.9%, Blocks (15 studies compiled) = 14.3%, and Liquids (10 studies compiled) = 23.4%.  Although it was not mentioned, attendees at the “Cattleman’s” College may have found it interesting to know that these averages were predominantly from studies conducted on sheep.  Only one of the block trials was with cattle and 3 of the liquid trials were with cattle.  Additionally most of the trials were from Australia and utilized pressed and chemically hardened poured blocks.  From the questions that were asked at the end of the session, one could tell than more than a couple Cattlemen were surprised that the self-fed supplements had such high levels of non-consumers.  I would count myself among them had I not known a little more about the data.

In defense of the data, I would say that even today, there is little if any University data on intake variation with blocks, and especially with low-moisture blocks like CRYSTALYX®.  Data that does exist, is largely from Ridley Block Operations.  One paper in particular, that is published in the Journal of Rangeland Ecology & Management (60:54–64, January 2007) is the source of the two graphs below.  Those of you that have known CRYSTALYX® for the last 15 years or so are probably well aware of the graphs, but if you are relatively new to CRYSTALYX®, you may not have seen them before.  Certainly much of Academia is not aware of the research that Dr., Derek Bailey conducted on CRYSTALYX® near Havre, MT in the early 2000’s.

Dr. Bailey conducted these studies with GPS collared cows.  Generally 10-15 cows were collared at one time, and the collars were moved to new cows every week. The GPS collars recorded the location of the cows every 10 to 15 minutes.  Thus it was possible to tell which cows came to the supplements and which did not.  Between 130 and 170 cows were used in these two trials over 2 years.  These studies were conducted in pastures between 600 and 900 acres with several hundred feet of vertical elevation change. 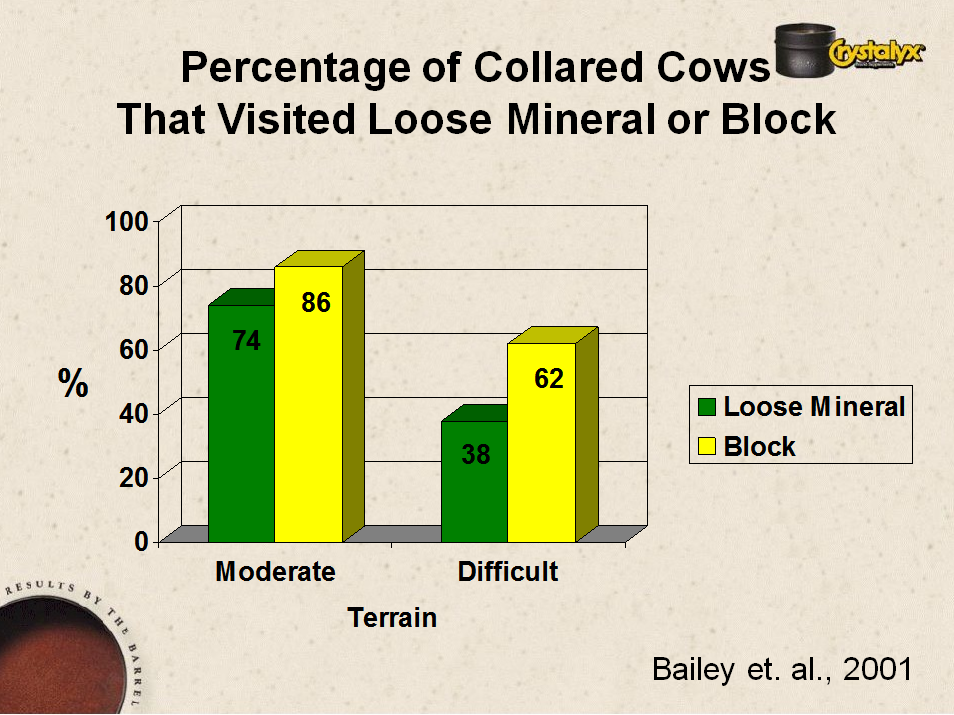 The data from the 2001 study was intended to look at how many cows were consuming supplement in moderate terrain versus difficult terrain (steeper slopes, and farther from water).  With either supplement, cows consumed less in difficult terrain, but a higher percentage of the herd consumed CRYSTALYX® blocks than did the conventional dry mineral (CDM), in either terrain.  The palatability and appeal of the CRYSTALYX® block is evident in the graph.

The data from the 2002 study was intended to show the differences in how many cows were consuming a CRYSTALYX® protein block (NP-27™), a CRYSTALYX® Mineral block (Crystal-Phos® 8) and a CDM.  The cows were continuously fed NP-27 supplement, whereas Crystal-Phos 8 and CDM were fed on alternate weeks.  The study was split into two locations.  One was a large pasture (813 acres), where the cattle grazed stockpiled forages.  The other pasture was smaller (260 acres), where cattle were fed hay.  You can see that there are differences between the two feeding programs, but the relationship between the different supplements is the same.  Consumption of CDM was lower than Crystal-Phos® 8 or NP-27.  Here again, the palatability and attractiveness of a molasses based supplement block like CRYSTALYX® is evident.

If you have very rough/difficult terrain, it “may” be possible to have up to 15% of your cattle not consuming a CRYSTALYX® mineral block.  However, you will be drawing those cows that do consume the CRYSTALYX®, into those areas, and they will consume grass there.  Perhaps grass that you would not harvest as well with other supplements.  In most moderate or “normal” pastures this “non-consumer” figure is likely 3% to 5% with protein formulas, and perhaps higher (10%) with mineral formulas.  The percentage of cattle in your herd that do not consume CRYSTALYX® will likely be very small.  If those non-consumers do not breed back as well, or they wean light calves, they will likely be culled from the herd.  This may be why the “non-consumer” number of some self-fed supplements gets to be very low. 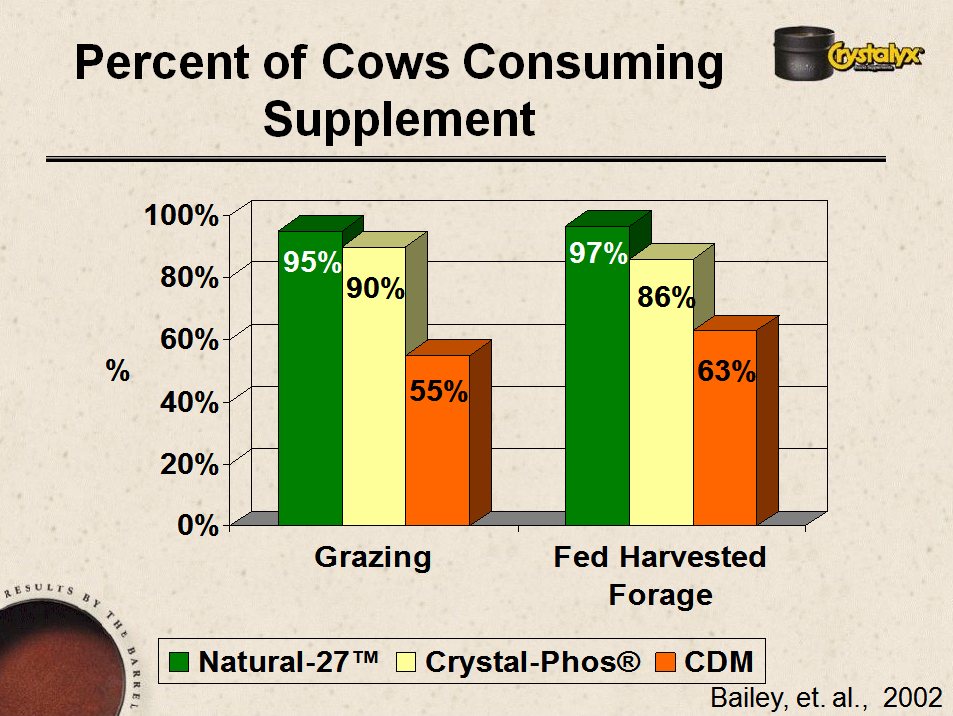 There was a wealth of other data collected in these two trials.  Far too much to expand on here today.  My intent in this blog was to provide you with some of the data we have had for years, on the percentage of a herd that is (or is not), consuming self-fed supplements like CRYSTALYX®.

CRYSTALYX® Brand Supplements are unmatched in palatability, are available to your herd 24/7, and are an excellent way to increase the utilization of your forage, with minimal input for time, labor, equipment and delivery cost.