Snowy weather across many parts of the country has reminded producers that winter is well on its way, which means winter hay feeding will begin shortly, if it hasn’t already. 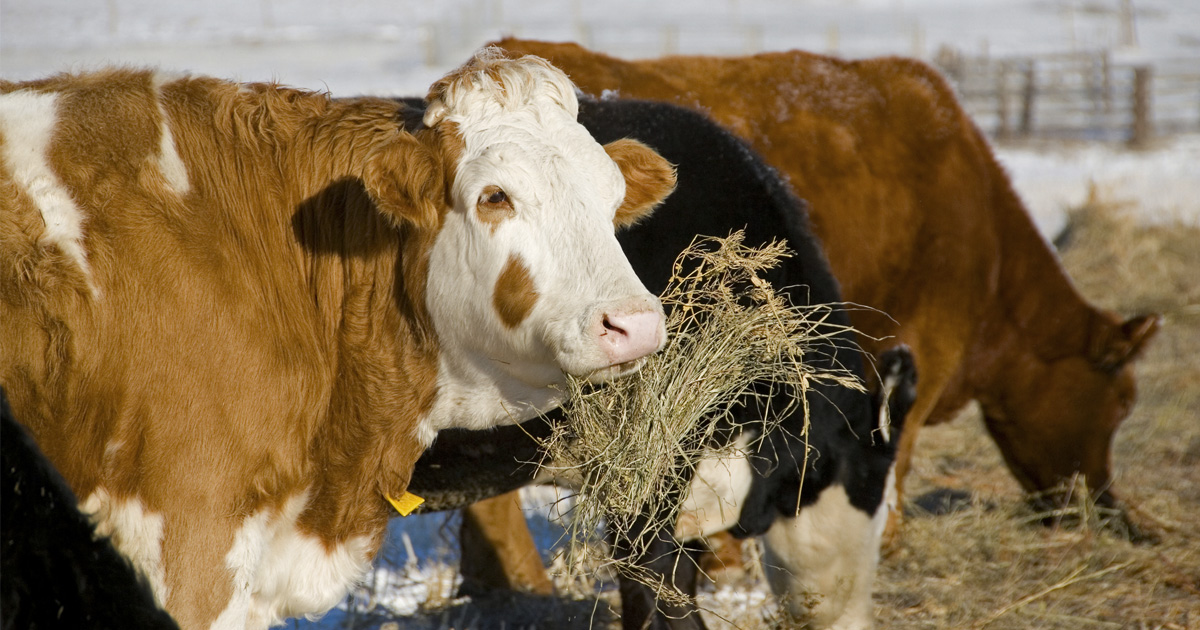 Feed expenses are the greatest variable cost responsible for influencing producer profitability. On average, these costs account for 40–60 percent of annual cow cost, or the total budget for a cattle operation. When pasture conditions are less than adequate during the winter months, many producers provide their cow herd with large, round bales of hay as the forage source. Unfortunately, this past year included both unseasonably wet and/or dry conditions in various parts of the country, resulting in poor-quality forage and a reduction in the harvested forage yield. With the common trend of a decrease in overall hay production and an increase in hay prices, reducing hay loss during storage and feeding has a great economic impact for many operations.

How hay is stored after harvesting has been extensively researched over many years. The average percentage of spoilage and dry matter loss after 6 months of storage is summarized in the table below:

The cheapest method of hay storage is to place round bales outside on bare ground, but this method also comes with the greatest amount of spoilage and dry matter loss potential due to direct exposure to weather, particularly moisture and sunlight. Weathered hay suffers the greatest losses of both yield and forage quality compared to undamaged harvested hay. Storage loss can be reduced by storing bales in elevated or well-drained areas using gravel, pallets, tires or other materials to break contact with wet soil and provide air space. Additionally, covering bales can result in a significant decrease in hay loss and spoilage and has been shown to cut the percentage lost by over half — from 27 percent to 13 percent — even if stored on bare ground. Storage inside a building is the most ideal, but this may not always be feasible. Storing bales with three to four feet of space between rows will help improve air circulation around them. Anything that can be done to reduce weatherization and spoilage of your bales will help the palatability and digestibility of your stored forages — ultimately saving you money.

The design of a hay feeder may also have a significant impact on hay waste. The largest amount of hay is wasted when a bale is unrolled and fed on the ground, resulting in nearly half of the bale going unconsumed. During periods of very cold or otherwise harsh weather, however, producers may use this method as a means of bedding cows — but it is not the most efficient way to feed hay. Limiting a cow’s consumption to a day’s worth of forage at a time can help reduce the amount that gets trampled on and not consumed. When hay is fed in a feeder, it can be better utilized.

There are many different design options for feeders. Based on university research, a solid sheet around the bottom wall of a circular bale feeder can reduce the amount of wasted hay to nearly 15 percent of the bale. When a cone feeder is used to hold the bale in its center, the amount of hay wasted drops to approximately 7 percent of the bale. Compared to an open ring feeder, the disadvantage of using the cone-shaped feeder is that a tractor with a front-end loader is required to place the bale inside the feeder, and some producers may not have access to such a tractor. 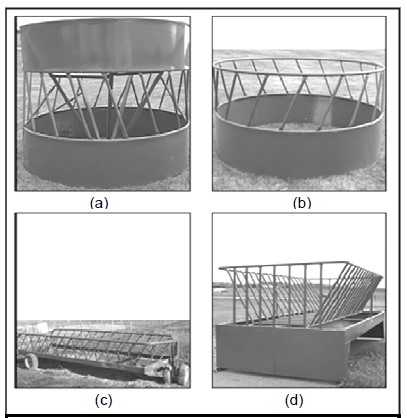 Research conducted at the University of Missouri also considered the impact of stocking rate and forage quality on the amount of hay wasted between chain cone feeders and open bottom ring feeders. At all stocking rates measured, hay waste was greater in open bottom ring feeders than in chain cone feeders. When forage quality was high (17 percent crude protein alfalfa haylage), hay waste did not differ between feeder types. However, when forage quality was low (7.5 percent crude protein fescue hay), 19.2 percent of the bale was wasted in open bottom ring feeders, compared to 8.9 percent of the bale in cone-type feeders. This research, among other studies, indicates that the decrease in wasted hay will more than pay for the additional cost of the cone-type hay feeders.

CRYSTALYX® helps you get more out of your forages

While your cows may visually seem full from consuming the hay you provide, do you know if they are getting the most out of it nutritionally? More than likely, they could be doing better. One way to help improve the digestibility of your forages as a way to maximize your returns is to provide them with a self-fed protein supplement that is available 24/7. The colder winter months and feeding hay coincides with the time of late gestation for spring-calving cow herds, when energy needs are high for both the cow and her developing calf. This holds true for fall-calving herds as well — their energy requirements are high due to increased demand for lactation. More energy can be released from lower-quality forages, however, when just a small amount of supplemental protein is provided in a self-fed supplement. Even if you have tested your forage and have determined that it has an adequate level of crude protein, your cows still require the balanced levels of trace minerals and vitamins found in CRYSTALYX barrels, which are wind-proof, waterproof and waste-proof. CRYSTALYX will save you time and labor while helping you get the most out of your forages.