Organic or Natural were terms that seemed pretty descriptive and easily understood years ago when describing nutritional supplements used in Livestock production.  That was then and now they have seemed to take on lives of their own as they can now also be used to describe very detailed marketing programs resulting in value-added products in both crop and livestock production.  With the broader use of both Natural and Organic, we have found confusion with livestock producers when matching supplements to meet not only their nutritional needs but also complying with any marketing programs that they are targeting for specific animals. 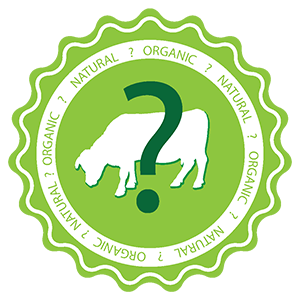 Organic, Natural, What Does it All Mean?

Years ago there were two areas where the terms natural and organic were used in the feed industry.  Starting with the term “natural” it was mostly used in describing protein supplements for ruminant animals.  Most all nutritionists would agree that it simply meant that all of the protein ingredients used in the supplement were from plant or animal based sources and that none of them contained NPN or non-protein nitrogen, the most frequently of these used being urea.  So basically you had a choice of using two types of protein supplements, those that contained urea or NPN ingredients, and those that did not, which were often referred to as “natural” protein supplements.  As a sideline here, also make sure you note that I did not say the “natural” protein supplements were strictly “vegetable” based.  There are approved animal proteins that could be used and still be considered “natural” as they are not classified as NPN ingredients.  With this last statement you may be starting to get ahead of me, but hold on as we look at the initial use of “organic” in the nutrition world.

The early use of the “organic” term as it related to nutrition came into play when describing primarily trace mineral ingredients.  Much of the early ingredients used to supplement livestock are in an “inorganic” form.  Trace minerals in an inorganic supplement have been combined with an inorganic salt, such as zinc carbonate, copper sulfate, zinc chloride or manganous oxide for example.  Improvements came along with increased bioavailability for chelated trace minerals and complexing the metals with “organic” compounds like specific amino acids, groups of amino acids often called proteinates or complex polysaccharides.  So at a high level, if you complex the trace mineral either by a specific chelated bond, or complexing it with specific organic compounds you can get it through the digestion process with less interference and improve  absorption in the lower gut.

In more general terms, chelated, organic and proteinate trace mineral complexes have been used to describe these more bioavailable forms of trace minerals in livestock nutrition.  I realize that there are differences between them in what type of complexing technologies and “organic” materials that they are bound to, but generally these trace mineral forms are classified as more bioavailable to the animal.  Because the materials used in combination with the trace minerals or metals are “organic” in nature like amino acids or proteinates, meaning that they contain carbon, the “organic” term has been used extensively throughout the industry to describe these trace mineral sources.  So there you have it, the nutrition world has been using both “natural” and “organic” references to help describe differences in supplements for quite some time and with specific meaning from a nutritional perspective.  Things have certainly changed.

So Why the Confusion Now?

Producers have been using protein supplements where the ingredients have been described as “natural”.  Most everyone has also seen the increase in livestock marketing programs that have used the “Natural” term in their description of program standards.  The definition of what “natural” means to these marketing programs has nothing to do with what was once used to describe “natural” proteins where NPN ingredients were excluded.  As an example, some of the natural programs may not allow animal based proteins in them to qualify for their premiums.  If you recall earlier, natural proteins that do not contain NPN ingredients, could in fact contain animal proteins and still meet the “natural” definition of the protein supplement, but not for the marketing program.  Many feed companies have been getting away from applying the “natural” term to product labels because of the overuse of “natural” in its description for a number of food products.  So remember, what we once used as a term to describe protein ingredients now needs to be evaluated in the context of how “natural” is being used to describe marketing programs.

As for organic, the same lessons can be applied.  Everyone is familiar with organic food production in terms of a certified system that avoids the use of synthetic inputs.  You can see from the discussion above that historically the nutritional use of the “organic” term has centered around the inclusion of a carbon material complexed to a trace mineral giving us a more highly bioavailable trace mineral ingredient.  This has nothing to do with making sure you have complied with the requirements for producing organic beef, chicken or pork.  Rest assured, we have had discussions with producers, consultants and customers where they have indicated that we can use these organic trace mineral premixes so that they then can comply with the requirements for organic food production.  It simply doesn’t work that way.  Let’s say for example that the amino acids used to make the organic trace minerals for which the specific trace minerals are complexed come from an animal source of protein.  This might easily drop them from compliance in the organic certification process.  We need to make sure we understand how “organic” is being used.

How to Avoid the Confusion

The best way to make sure you are understanding fully what is being used in your supplements is to ask questions.  No one in the feed industry is intentionally trying to hide what their products are made from.  Labels that come with each and every product have all of the information that you will need to make sure you understand what is included in the final product.  Do not assume anything if it is not clear to you.  If you have questions or are uncertain the ingredients comply with marketing your livestock, contact the feed company and ask for their nutritional staff.  There are also 3rd party verification companies like IMI Global, that have verification procedures in place that can help provide information on what the requirements are for most all of the marketing programs available in the industry.