In many parts of the Southeast and southern Midwest U.S., Kentucky 31 (KY-31) Tall Fescue is the primary forage used for grazing cattle, representing over 35 million acres of grazing land. While it has many attractive agronomic characteristics, including hardiness under varied climactic conditions, persistence under heavy animal pressure, tolerance to close grazing and resistance to insect pressure, there are several negative nutritional characteristics that impact cattle. A study conducted several years ago found that industry wide economic losses resulting from reduced growth and reproduction as a result of fescue toxicity were estimated to be over $3.2 billion. (Kallenbach, 2015) 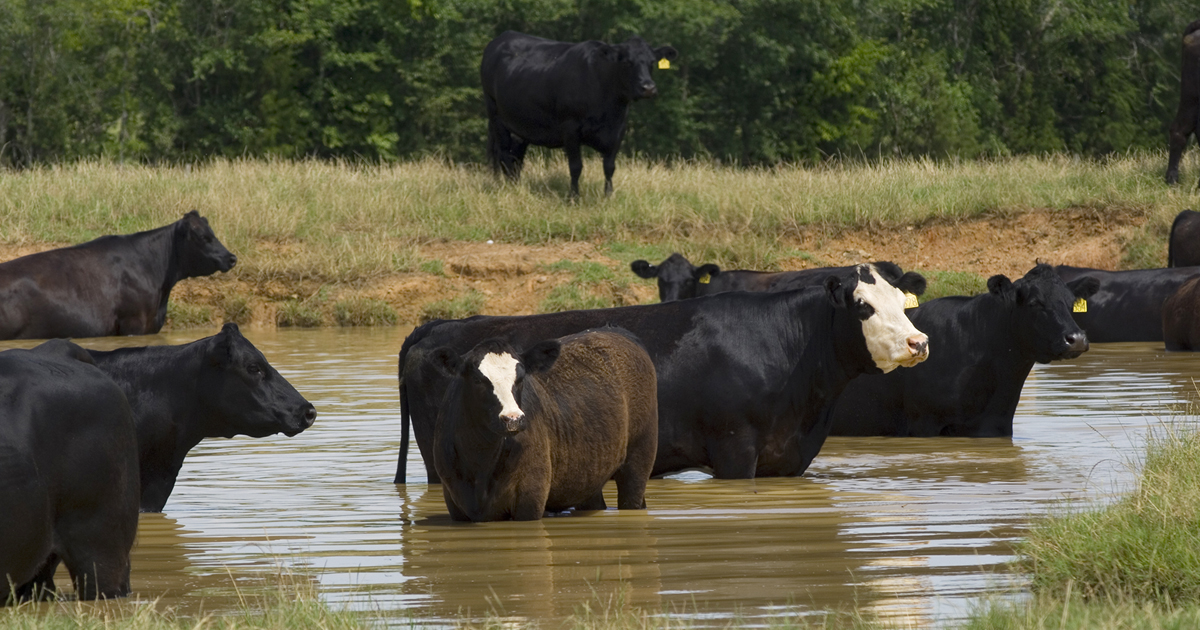 Contributing to the hardiness of the plant, tall fescue usually contains an endophyte, which is a type of fungus that lives symbiotically inside of the plant. The endophyte produces chemical toxins, called ergot alkaloids (ergovaline is the predominant compound), which make the grass less palatable than many cool season grasses, for both insects and grazing livestock. These toxins cause problems in cattle such as higher body temperatures (restricted blood flow to the extremities which limits heat escaping outside of the body), increased respiration rates or panting, and reduction in intake, reproduction rates, milk production (lowered levels of the hormone prolactin) and weight gain.

There are several classic signs of fescue toxicity. One of these is a rough hair coat, with cattle slow to shed their winter hair. The hair coat often has a reddish tint, indicative of or similar to copper deficiency. Additionally, cattle will often stand in ponds to relieve heat stress and lie in the shade during hotter parts of the day instead of grazing. Management recommendations to reduce negative effects include: diluting fescue pastures with other forages such as clover, renovating fescue pastures with other cool season forages, including novel endophyte fescue (which does not elicit toxic compounds), and feeding other feeds in order to dilute the diet of the toxic compounds.

While these effects can take place year-round, the impact on gains, reproduction, milk production and higher body temperatures is more likely to happen as the ambient temperature increases from spring to fall. Recommendations from a recent University of Kentucky Extension bulletin advise you do the following: “Avoid grazing endophyte-infected pastures during critical times. Don't graze high endophyte pastures just before calving and just before breeding. If possible, graze other species for around 60 days after calving. Also, don't use infected fescue with lactating dairy cows.”

These recommendations highlight the effects on cows and calves at very critical production cycles when exposed to toxic fescue. The toxins constrict blood vessels that normally allow internal heat to escape and cool the cow, which results in added heat stress. As this occurs during the peak of breeding season, early loss of embryos may take place. In early lactation, the cow is also trying to feed a young calf, so any reduction of milk will reduce weight gain and affect weaning weight. Likewise, stocker cattle will likely have reduced gains due to poor palatability of fescue and added heat stress during the warm season. A dairyman relying on milk production for his income will experience a major hit if he has cows grazing on toxic fescue, especially if they are lactating cows or dry cows prepping for lactation.

Attempts to ameliorate the negative effects of fescue toxicity over the past two decades has led Alltech® researchers to test various yeast derivatives. Seizing upon the affinity of a yeast cell wall component called modified glucomannan, an early 2000’s report based on in vitro experiments displayed that as much as 40 percent of the ergot alkaloid ergovaline could be bound with modified glucomannan in only 1.5 hours of incubation. Focusing on this affinity, animal experiments showed the same product fed to cows grazing toxic fescue pastures had improved body condition scores and improved conception rates (Aaaron et al., 2006; Ely et al., 2006), and, when fed to stocker cattle, resulted in increased body weight gain (Akay et al., 2003a). By approaching the fescue toxicity problem from the standpoint of mitigating these problems before they occur, it is expected that animals will maintain a healthier status throughout their productive lives.

A proprietary product developed by Alltech is called FEB-200™ and is now a primary additive in several CRYSTALYX® fescue blocks. Product options include Fescue-lyx®, Hi Mag Fescue-lyx®, Fescue Phos®, and, the most recent addition, Blueprint® Fescue Mag FEB-200™. Since research has also shown that copper availability is lowered in toxic fescue, each of these products has elevated levels of copper and zinc. Fescue Phos and Blueprint Fescue Mag FEB-200 include Bioplex® Hi-Four, the organic forms of copper, zinc, manganese and cobalt.

If you are a producer who relies heavily on fescue as your primary forage, consider the benefits offered by CRYSTALYX fescue blocks with FEB-200. Testimonials conducted after the product’s initial release in 2017 have been very positive, with producers reporting improvements in hair coat, body condition, reproduction and weight gain of young stock. Contact your local CRYSTALYX dealer for more information.

CRYSTALYX helps get my heifers into breeding condition.