I recently had a question about the amount of sulfur in a CRYSTALYX® block, and is that level something we should be concerned with?  The short answer is “no”, but let’s dig a little deeper.

Is there a need for sulfur in beef cattle diets?

Sulfur is an essential nutrient/macro mineral for beef cattle. It is needed for the amino acids methionine and cysteine, as well as some B vitamins, e.g. thiamine. Rumen microbes require sulfur for growth and metabolism.  Utilizing urea, or non-protein nitrogen in beef cattle diets and supplements, will reduce the amount of sulfur available to the rumen microbes. This is why sulfur is sometimes added to a diet or supplement that uses urea or non-protein nitrogen.

How much sulfur is there in a CRYSTALYX® block?

Should I be concerned about these levels of sulfur in a block?

Then why would anyone be concerned about sulfur in a block?

Sulfur, Iron and Molybdenum are known to be trace mineral antagonists. These antagonists can interfere with the normal absorption of several important trace minerals, e.g., selenium, zinc and copper. This can be especially true when forages contain high amounts of these antagonists.  Sulfur levels of 0.25% and higher, in the diet, can cause reduced availability of these trace minerals. The sulfur level in a CRYSTALYX® block would only contribute about .01% of this theoretical 0.25% level.  Said another way, if the sulfur level in your cow’s diet is 0.15% without a CRYSTALYX® block, then it would be about 0.16% with a CRYSTALYX® block. The block is adding an inconsequential amount of sulfur to a diet. 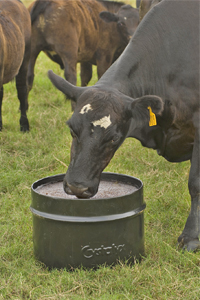 Much of the concern about molasses, sulfur and trace mineral antagonists, would come from research conducted in Florida, where it is common to supplement cattle with straight molasses.  Molasses alone, would contain about 0.40% sulfur. Molasses without any intake limiting additives, could have self-fed intakes as high as 5 or more pounds/hd/d. This would be about 5 to 10 times as much as would be delivered in a LMB block like CRYSTALYX®. While this amount alone would still be fairly safe, when it is added to other normal occurring levels of sulfur in a diet, it can be enough to begin to interfere with trace mineral absorption from the diet. I believe this is why some people may be concerned about blocks that contain molasses.   But again, a block with its low intake, is adding an inconsequential amount of sulfur to a diet.

What if I do have high sulfur in a beef cow diet?

If you have a high, or concerning level of sulfur in your cow’s diet, it is most likely coming from high sulfate levels in your water source. Distillers grains are also known to have varying levels of sulfur in them. Occasional batches of distillers grains can, at times, be high enough in sulfur to induce Polioencephalomalacia, let alone interfere with trace mineral absorption. You can nullify the impacts of these trace mineral antagonists by using organic (or chelated) forms of trace minerals in your supplement. These organic trace minerals are absorbed differently (and at different sites) than inorganic forms of trace minerals. All CRYSTALYX® Breed-Up® Supplements supply 200% of NRC requirements for trace minerals and vitamins and they contain Bioplex® organic trace minerals, for better bioavailability when antagonists are present.  This is an excellent way to provide optimal trace mineral nutrition when combating high levels of antagonists in your grazing or feeding program.