The history of CRYSTALYX® low-moisture blocks goes back more than 44 years, to a patent originally obtained by Carl O. McKenzie. Legend has it that he got the idea while observing how hard candy was made at Knott’s Berry Farm. The patent was submitted in 1974 and was approved on June 1, 1976. This patent describes the batch process by which we still make CRYSTALYX today. The most notable feature of this batch process is the ability to use a vacuum step in the manufacture of the blocks. The utilization of a vacuum chamber allows us to remove essentially all moisture from the molasses products used in the manufacture of CRYSTALYX. Molasses is a byproduct of the sugar industry and has a variable moisture content. Removing all of that moisture, regardless of its level when it arrives at the plant, is the cornerstone in making quality low-moisture blocks with unparalleled intake control.

The name brand CRYSTALYX dates back to 1977, but the actual product itself was patented in 1976. 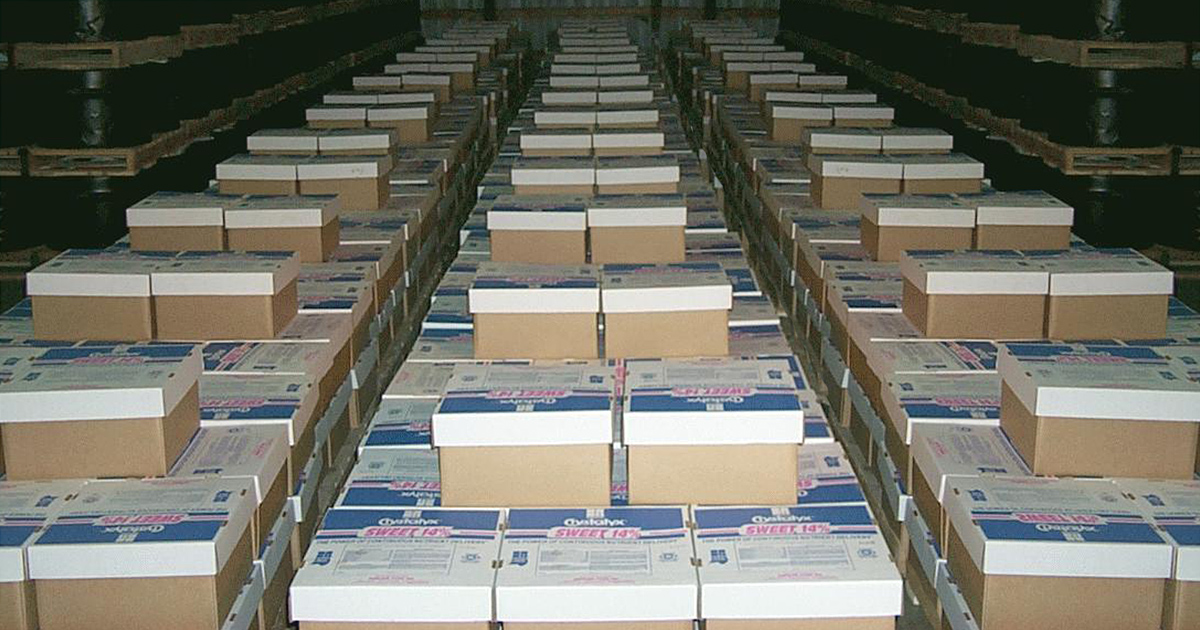 The original formulations were few and quite simple. They would be what we today call a multispecies formula, as they contained very light fortification and no added copper. Products were initially packaged in 50-pound cardboard boxes, and sales were dismal. Beginning in the early 1980s, CRYSTALYX was put into the 250-pound steel half-barrels that we recognize today. Also, around this same time, the owners of the manufacturing facility in Whitewood, South Dakota, started a marketing relationship with Hubbard Milling Company, headquartered in Rapid City, South Dakota. Sales escalated, and today, CRYSTALYX is still the industry leader in self-fed supplements.

CRYSTALYX® HE-12™ and HE-20™ were the original formulas. They only differed in that HE-20 included an added 8% equivalent crude protein from non-protein nitrogen (urea). “HE” stands for high-energy. At the time, it was believed that providing a supplement high in energy was a good selling point. Today, we emphasize providing vitamins, minerals and rumen-digestible protein versus the direct supplementation of energy. Products named Super-Mag™, Mineral-lyx® and Beef-lyx® followed. Currently, there are over 100 CRYSTALYX formulas sold in North America.

Just before I started with the company in 1995, a fairly large change had taken place in the formulation of the “HE” products: copper was added to those formulas at 115 ppm. This was a move to add value to those supplements, as grazing beef cattle are almost always deficient in copper. Other trace minerals were added as well, but the copper posed a special problem for sheep producers that had been feeding the HE products to their flocks. At this point, CRYSTALYX® Sweet 14%™ was added as a multispecies product that was safe for sheep.

Around the same time, we were having great success with a product named CRYSTALYX® Fescue-lyx® in the south-central U.S. We were also setting up new distributors further south, from Texas to Alabama. Bermuda grass was abundant, and there was a desire to capitalize on incorporating that name in to a CRYSTALYX product. This resulted in a Bermuda grass formula with 30% crude protein. We shortened “Bermuda grass formula” to the acronym BGF, giving us what is currently the best-selling CRYSTALYX product: BGF-30™. BGF-30™ was also unique in that it contained 2.0% phosphorus at a time when almost all other CRYSTALYX protein formulas were either 0.8% or 1.0% phosphorus. A CRYSTALYX protein product with 2.0% phosphorus will supply adequate phosphorus on most forages through the second trimester of gestation for a beef cow. This was seen as quite a big step forward at the time.

In 1996, we collaborated with Kansas State University to conduct a digestion trial with CRYSTALYX® BGF-30™. The trial showed that supplementing beef cattle with BGF-30 increased their digestible neutral detergent fiber (NDF) intake from prairie hay by 20% over non-supplemented animals receiving only prairie hay — a remarkable increase in the energy made available to the animal, from only one pound of supplement. Perhaps the originators of CRYSTALYX were onto something when they named the products “high-energy”! This trial also showed the negative associated effects of feeding grain to cattle on low-quality diets, as doing so lowered digestible NDF intake by around 20%. 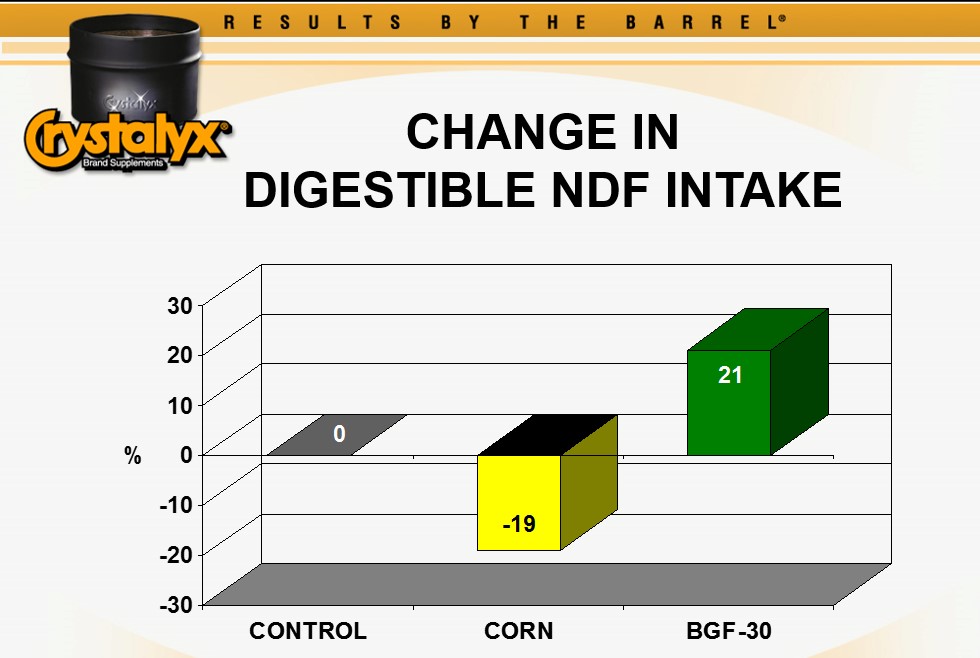 The year 1997 marked the start of eight years of research into a non-nutritional aspect of feeding CRYSTALYX. This is what we called the cattle grazing distribution research. Dr. Derek Bailey was instrumental in measuring the benefits of using CRYSTALYX to lure cattle to under-utilized rangeland. The results continually showed that CRYSTALYX could increase forage utilization by 15% every two weeks within a 600-yard radius of a set of CRYSTALYX barrels. The use of GPS collars on cows also showed that CRYSTALYX was superior to salt and mineral when it came to luring cattle to these under-utilized rangelands. The percentage of the herd that consumed CRYSTALYX was also shown to be much greater than the percentage that consumed a mineral. This research successfully demonstrated that you could change the behavior of cattle based solely on how you supplemented them. 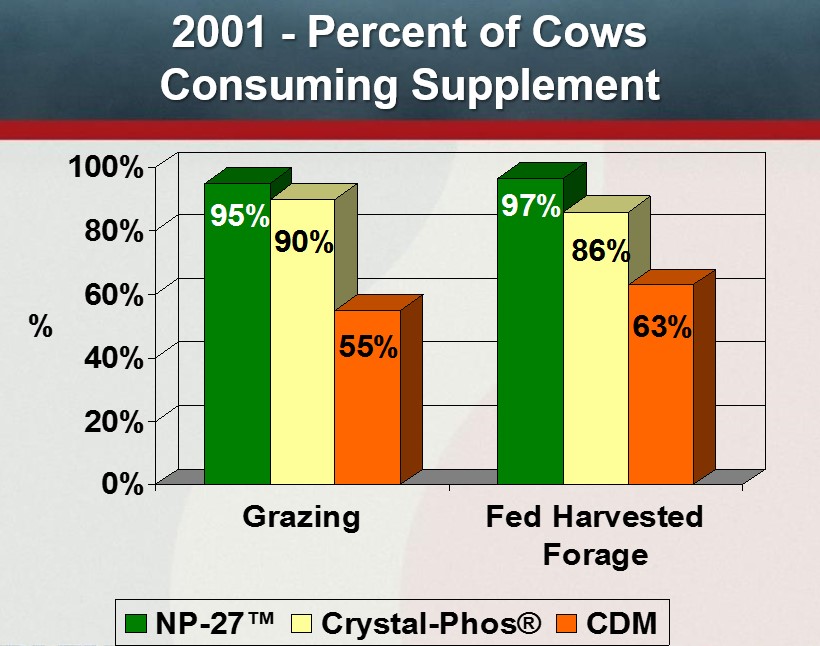 Another trace mineral fortification change occurred in 1998, when CRYSTALYX products were enhanced from providing around 30–50% of National Research Council (NRC)-recommended levels of cobalt, copper, iodine, manganese and zinc to providing 75% (in the HE products) and 100% (in all other beef products) of NRC levels. Many of our products still include those same levels today.

Two CRYSTALYX innovations got their start in 1999. While the CRYSTALYX® Brigade® formula had been around for several years, the sales were pretty minimal until we nationally advertised the results of research conducted at a large stocker operation in Kentucky. Brigade consistently reduced morbidity and mortality when used in the pens of weaned or newly received calves. Feed intake, feed efficiency and average daily gain also increased when Brigade was used. Calves weaned on Brigade stayed healthier and performed better. Customers often see an ROI of 2:1 to 3:1 on Brigade. In a few short years, Brigade went from selling a couple hundred tons a year to being our fourth highest-volume product.

The second innovation of 1999 came out of a conversation with CRYSTALYX Sales Manager; Jon Albro about increasing the phosphorus content of our standard mineral formula, CRYSTALYX® Mineral-lyx™. The typical intake of Mineral-lyx, which is a 4% phosphorus formula, was generally around 0.4–0.5 lb./head/day. The resulting product innovation, which came to be known as CRYSTALYX® Crystal-Phos®, was an 8% phosphorus formula consumed at 0.25 lb./head/day. Crystal-Phos is consumed at half the rate of Mineral-lyx, but it does not cost twice as much, making it a much more economical way to supplement phosphorus via a CRYSTALYX product. Today, you know this product as Crystal-Phos® 8, and we have a lower-phosphorus product called Crystal-Phos® 4. These were the first low-moisture blocks to achieve a reliable intake of about ¼ lb./head/day. Today’s CRYSTALYX products — such as Fescue-Phos®, Breed-Up® MAX, IGR Max™, Rolyx® Max and the entire line of CRYSTALYX® Blueprint® 6% products — can trace their origins back to the original Crystal-Phos.

The first fly-control products in the CRYSTALYX line were released in 2001. They are based on Rabon® Oral Larvicide (ROL). Rolyx® Pro and Rolyx® Max were introduced as protein and mineral versions, giving customers season-long options for fly control. Rolyx Pro was modified in 2014 to include a high level of magnesium and was subsequently renamed Rolyx® Pro-Mag. Altosid® fly control options were added in 2007, and ClariFly® options were added in 2016. All three options for CRYSTALYX fly control are available in mineral and protein versions.

In late 2003, we received approval from the FDA for CRYSTALYX® Iono-lyx® B300. It was launched in early 2004 and is still the only medicated low-moisture block ever approved by the FDA. Bovatec® has consistently shown a 10% increase in stocker cattle gains on pasture.

The CRYSTALYX® BioBarrel® was launched in 2006 as the result of several years of research at Kansas State University. The original version was composed entirely of wheat straw and soy flour. Ridley purchased the patent and has improved upon it twice. First, in 2009, a small amount of aspen wood chips was added to the formula to increase its strength and durability. The patented Weatherall® coating was added to the outside of the BioBarrel in 2014. The Weatherall coating increases the barrel’s durability in rain and high-moisture conditions and also strengthens the sidewalls. Today’s CRYSTALYX Weatherall BioBarrel is unmatched in its ability to balance biodegradation in the pasture and durability in the warehouse.

CRYSTALYX launched a line of premium products in 2007 called CRYSTALYX® Breed-Up®. Breed-Up® 20 and Breed-Up® 28, the initial products included in the line, feature trace mineral levels at 200% of NRC recommendations, with 25% of that derived from organic trace minerals. Mineral, high-mag and flax-containing formulas followed (Breed-Up® MAX, Breed-Up® 17 Mag and Breed-Up® Omega™). Customer acceptance and praise of these formulas was unmatched until we introduced CRYSTALYX® Blueprint® in 2017.

The Blueprint concept of “getting more from less” has been proven multiple times since its launch three years ago. I believe that most all nutritionists who have experience with Blueprint would agree that the removal of inorganic trace minerals from the diet of the animal has had a major impact on the positive results we have seen. Improving trace mineral nutrition beyond Blueprint will necessitate the invention of even more biologically available trace mineral compounds. As it stands today, CRYSTALYX Blueprint is as good as you can get.

Altosid® and ClariFly® are registered trademarks of Wellmark International.

Rabon® is a registered trademark of Bayer HealthCare LLC.

Blueprint®, Bioplex®, Bio-Mos® and Integral® A+ are registered trademarks of Alltech.