Early on as I entered into my Feed Industry career following a number of positions in the University Extension Service, I had the opportunity to participate in some Dealer focus group sessions.  We were evaluating what they and their customers valued in non-confined Beef cattle supplement programs and primarily cow herd supplements.  As we talked through what was available on the market, one concern that was mentioned has stuck with me over the years and is in regard to the packaging or containers used in free-choice or self-fed supplements.

Recently, I spoke with a cattle producer who, due to economic circumstances, decided to save some money by going from a complete, balanced, mineral supplement program to offering plain, white salt. Unfortunately, his cost savings plan unwittingly resulted in severe foot rot issues in his herd. His cattle had abscesses requiring veterinary treatment.  He wanted my help in choosing a supplement to help fix the problem.  Now, he’s going to have to purchase an even more highly fortified (and more expensive) supplement than what he’d used originally in order to try to replenish his cow’s depleted mineral reserves.  That doesn’t take into account his vet bills or lost production. Add to that, the fact that it will take at least a year for the hooves to grow out, so problems are likely to continue for months. Unfortunately, in his case, he saved a penny only to spend a dollar later. This is an extreme case, but it points out the value of a solid mineral supplement program and the train wreck that results when animals don’t get what they need. 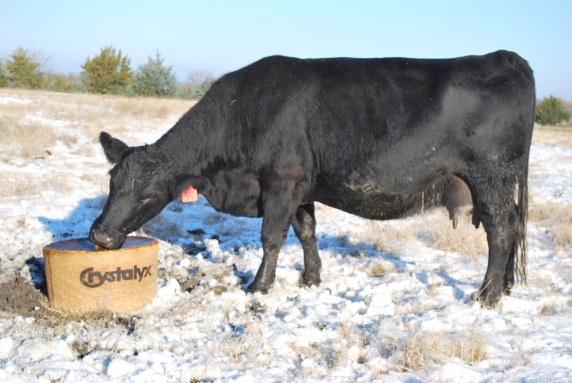 Welcome to January 2014!  I was traveling last week in a part of the U.S. that was affected by winter weather.  While I don’t want to downplay the added stress severe cold can cause, I was somewhat amused by the media’s coverage of what most of us in the Ag world understand as simply “Winter,” and not necessarily “Polar Vortex.”

I recall a recent story that was related to me by one of our Account Managers, where a potential customer drove his truck to a CRYSTALYX® Dealership and said, “What is your price on a tub like this?”  He was pointing to a low-moisture block that was made by a competitor and labeled for a local chain of feed stores.  Obviously the customer was making the buying decision entirely on price, and the only difference he saw between the tubs, was in fact, the price.  Everyone has that right when faced with a purchasing decision.  Do we look at features, benefits and value, or just ask for a price?  I will have to admit that I purchase gasoline or diesel almost purely on price and convenience of the filling station.  For other items, I’d generally like a little more information.