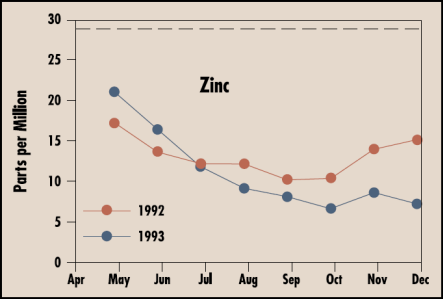 In my last blog (about 7 weeks ago), I predicted that it always rains at the end of a drought.  For many of us in the northern plains, we received one to two feet of snow in April.  Some had more, and some had less, but in many areas it was the first appreciable amount of precipitation in months.  Could it be that it may snow at the end of a drought?  Perhaps so, but it is way too early to say we are coming out of the great drought of 2012.  There will be ample moisture in many places to spur some spring growth of cool season grasses.  Jon Albro had an excellent Blog on March 19th about the increased likelihood of grass tetany following a dry winter.  As you read this today, many of you may already be experiencing that.  Hopefully you have had high magnesium supplements out ahead of the threat.

Being ‘green’ is all the rage now. Electric cars, canvas grocery bags and the local food movement all make people feel better about how they live. Amanda Radke, writer for Beef Magazine, points out that beef production has been green for a long while. Her recent editorial has inspired my blog for the week of Earth Day.

For me, College NCAA Basketball is one thing that makes it possible to get through March and April.  This year has been especially fun.  Who knew what would happen.  A number 11, three 12s, a 13, a 14 and a 15 all won.  The Final Four had only one number 1 seed.  How did these lower ranked teams win?  They played the whole game.  Many games went to the wire with teams fighting to the end. 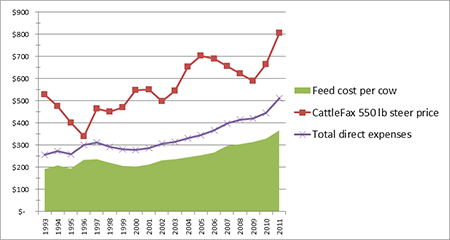 Last week I reviewed cost of production information that can help producers with benchmarking within their own operations.    A representation of calf prices in relationship to feed costs and total direct expenses are shown below in Graph 1.  Don’t forget to go to the following website if you would like to evaluate these benchmarks in more detail when comparing to your operation http://www.finbin.umn.edu/.  This week I wanted to look at adding producer returns during the same time frame.  In Graph 1, I added this information as returns over direct expense.  It is interesting to note that these returns over direct expenses for the years 1993 and 2011 are within $12 of each other and would be well over $200 per head.  Even though the price of feed and for that matter all direct costs, have increased dramatically, calf prices have more recently kept pace to provide similar returns over direct expenses.

One thing about writing a blog, you often think about what topics are on the minds of producers in the industry and then start looking for information to help shape our opinions and come to a conclusion about that particular topic.  We are all aware of the recent increase in calf prices over the last decade and how that has impacted the beef industry (see graph).  Weaned calves weighing 550 lbs were once in the $400 to $500 range in the 90’s and are now more like $800 or higher at the present time.  A common question that often comes up when looking at the dramatic increase in calf value in recent years, is what has happened to the costs of production associated with raising weaned calves, especially when considering feed costs.