In light of recent drops in cattle prices, it is understandable that cattle producers are looking for ways to protect their investments. One such way is to reduce input costs. Considering that 80% of the cost of raising cattle comes from feed, one obvious way to do this is to optimize digestion efficiency. We can optimize digestion efficiency through two simple concepts- feed the rumen and protect the gut. 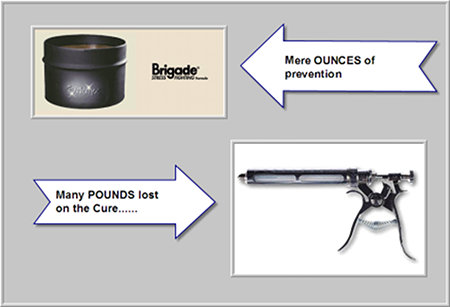 By now, more and more producers are learning about the Veterinary Feed Directive (VFD) that will bring about a change in regulating feed-through antibiotics.  There’s been a lot of recent popular press and blog chatter on this subject.  The intent of the rule, now finalized, isn’t really that different from when it was introduced and debated at the Food and Drug Administration in 2009.  The industry comment period has resulting in some changes related to documentation.   The final rules have been published this year (June), and have already taken affect for some drugs and more (the main ones concerned in cattle feeds) will go into effect on January 1, 2017.

Every cattle producer wants to get all they can from their land and cattle. Some times that means running a temporary fence to keep cattle in certain areas they just don’t care to go. What if there was a way to lure cattle to the other end without having to get out the T-posts and post driver? Why not use the supplement you already have to move your cattle around the pasture?